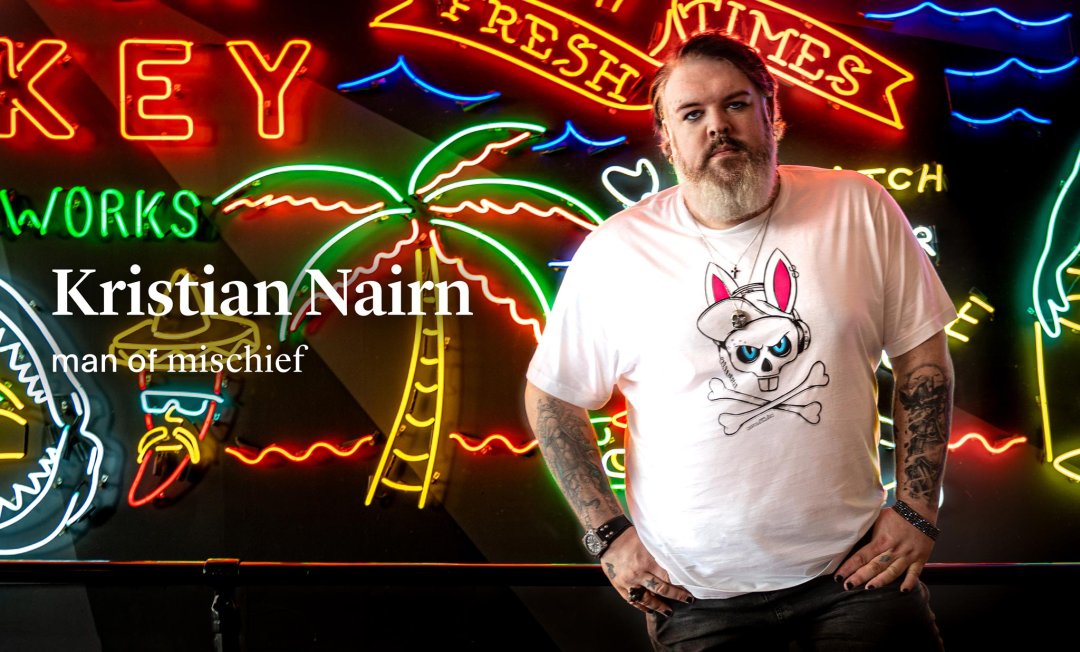 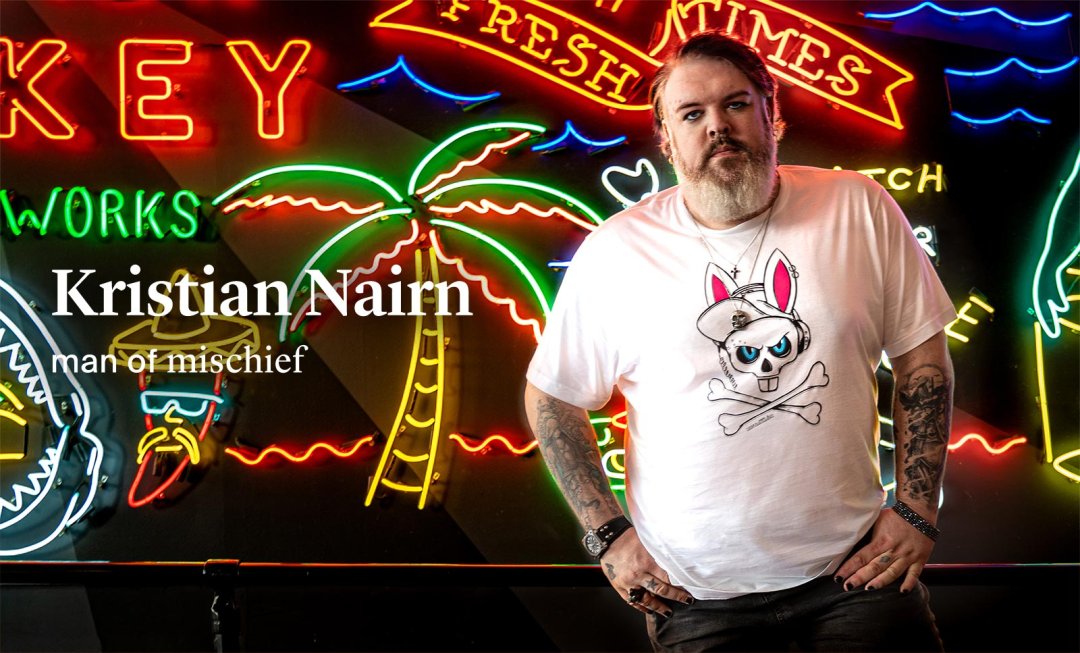 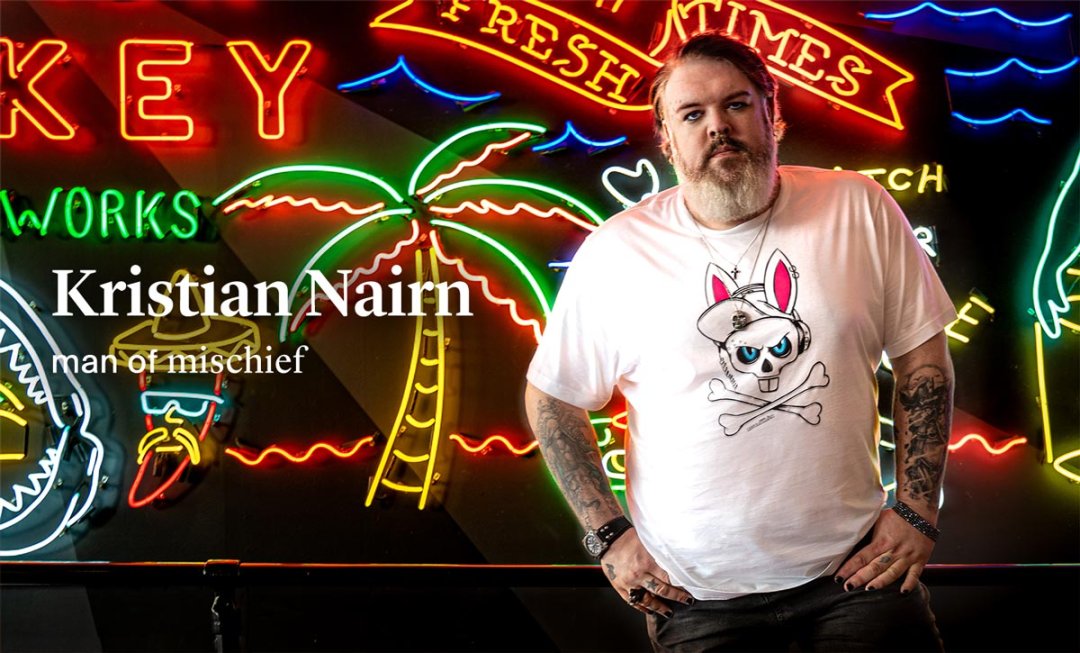 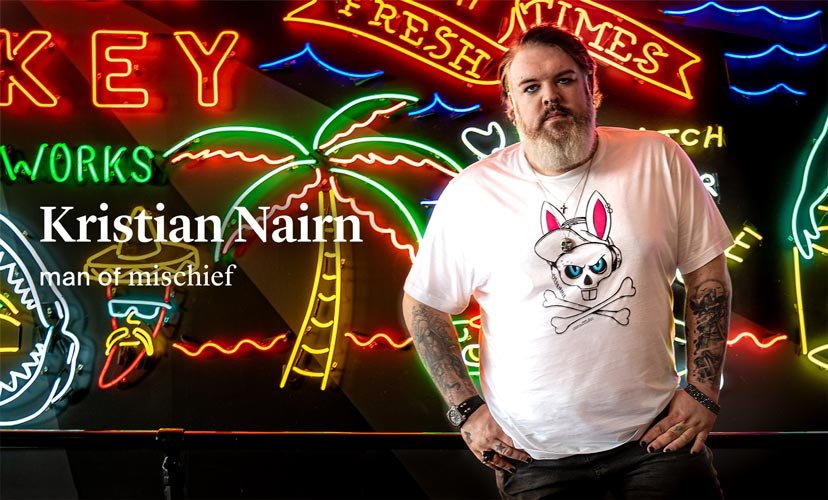 To some, Kristian Nairn is an actor. To others, he’s a DJ. If you’ve watched Game of Thrones, you might recognize him as the inimitable Hodor; if you’ve seen him DJ, you’ll remember his peerless stage presence. In his eyes, though, he’s just Kristian Nairn — a guy who’s been lucky enough to see a lot and learn a lot on the way.

Between playing shows from Atlanta to Belgium and spending time in his native Northern Ireland, Kristian can be a hard man to catch up with. We sat down with him in Los Angeles to talk about his creative process, finding himself and his tribe, and proving people wrong without ever trying to.

So — first things first — how do you describe what you do? Do you see yourself as more of a DJ or an actor?

I get asked that question a lot, and, honestly, it’s very difficult for me to answer because I don’t see myself as either. I just see myself as me. People do like putting you in a box, though and when I’m asked that question, I always wonder why. I guess, if you’re at a gig and watching me DJ — you think I’m a DJ. But, if you see me on screen — then you think I’m an actor.

Music might come a bit more organically for me. But I just love to perform. I find them both quite similar in that way, even thought the process is different. It’s almost like a form of escapism; I love getting into character when I’m acting, it’s like taking a holiday from yourself, and, when I’m on stage, you get lost in the music and you become this hyped-up version of yourself.

What’s that like? Is there a switch or a ritual that allows you to go from Kristian, the civilian, to Kristian, the performer? Or does it just happen naturally without you even realizing?

There are times where I’m travelling when I’m so tired — or when I’m sick — and I don’t know how I’m going to be able to perform, but the minute that I get up on stage and play the first track and see the crowd — it’s so rewarding and energizing. Those can be the best gigs, to be honest. When you’re tired and the energy comes from somewhere deep within you — that you didn’t know how to tap into. Those are the best gigs because it’s primal.

I don’t know how I turn it on or off, honestly. I’m a private person and I enjoy my private time after a gig — almost running towards my hotel room. When I’m on stage, though, it’s just completely different. I don’t know where I get that from — it’s just something I have. 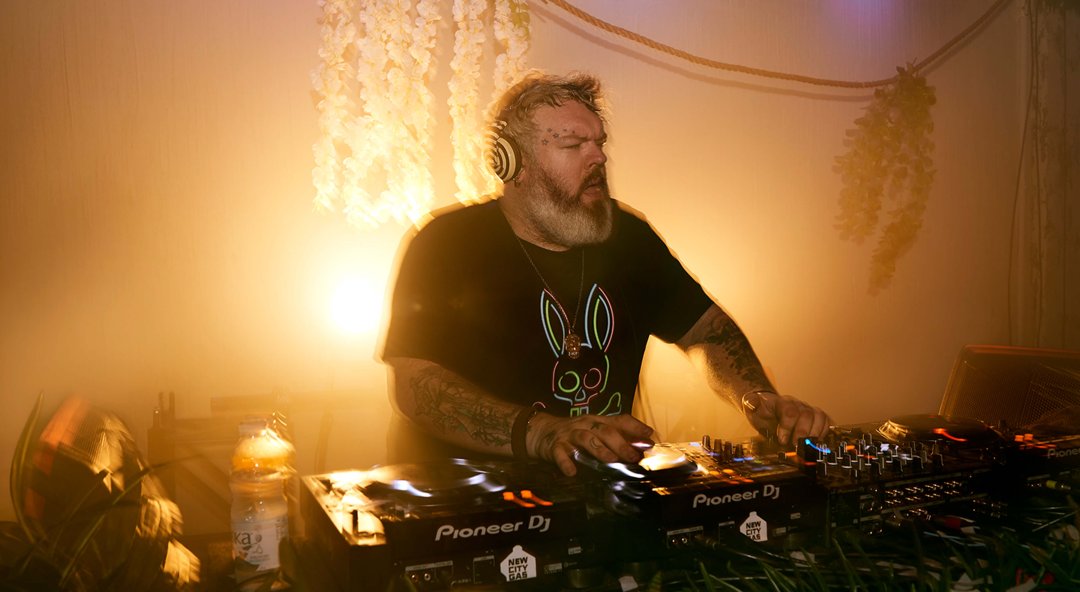 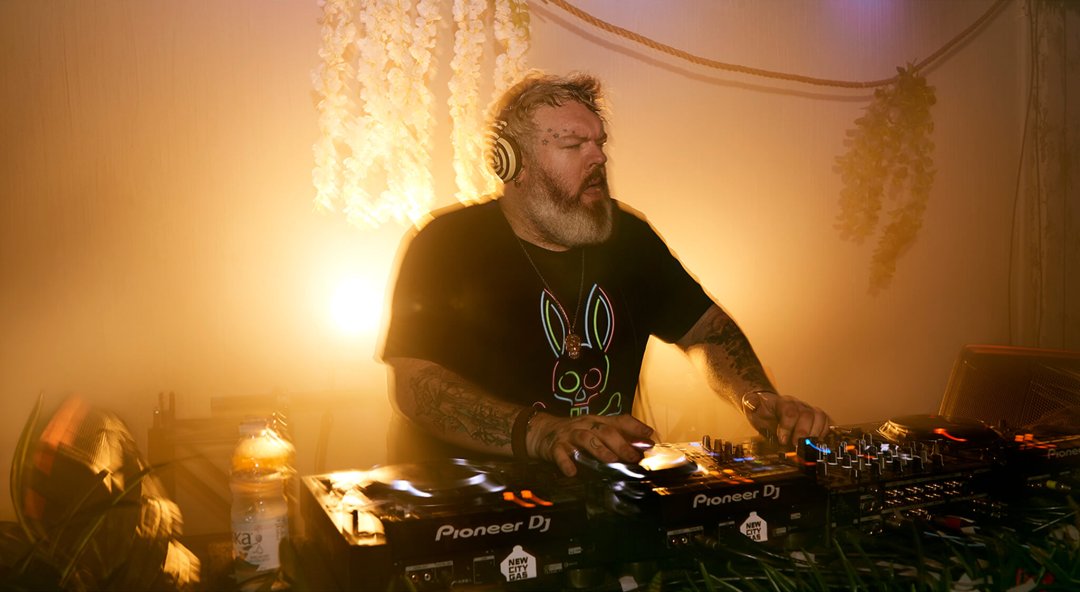 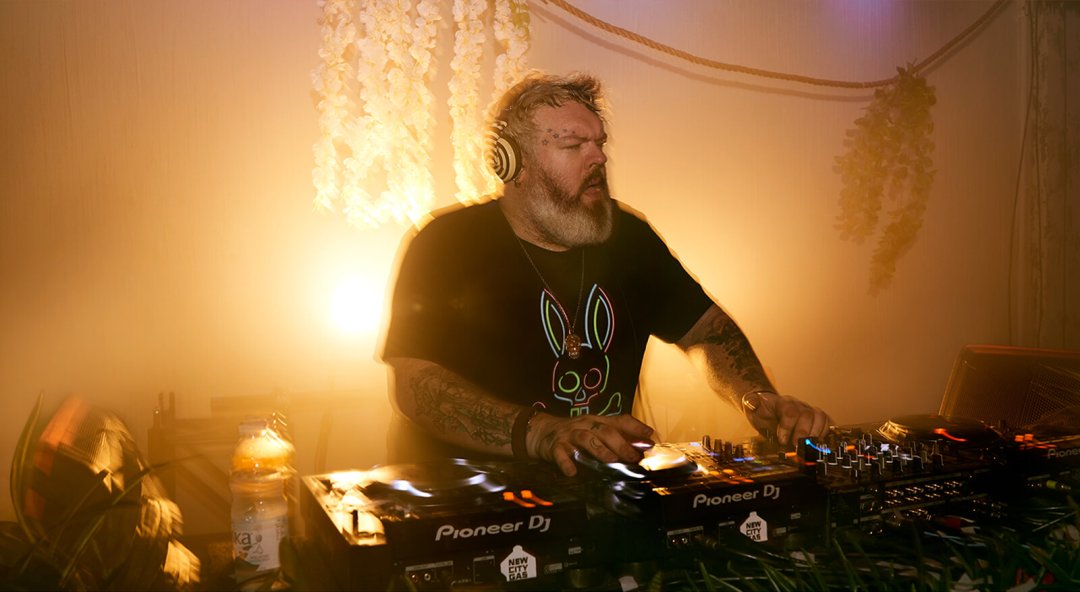 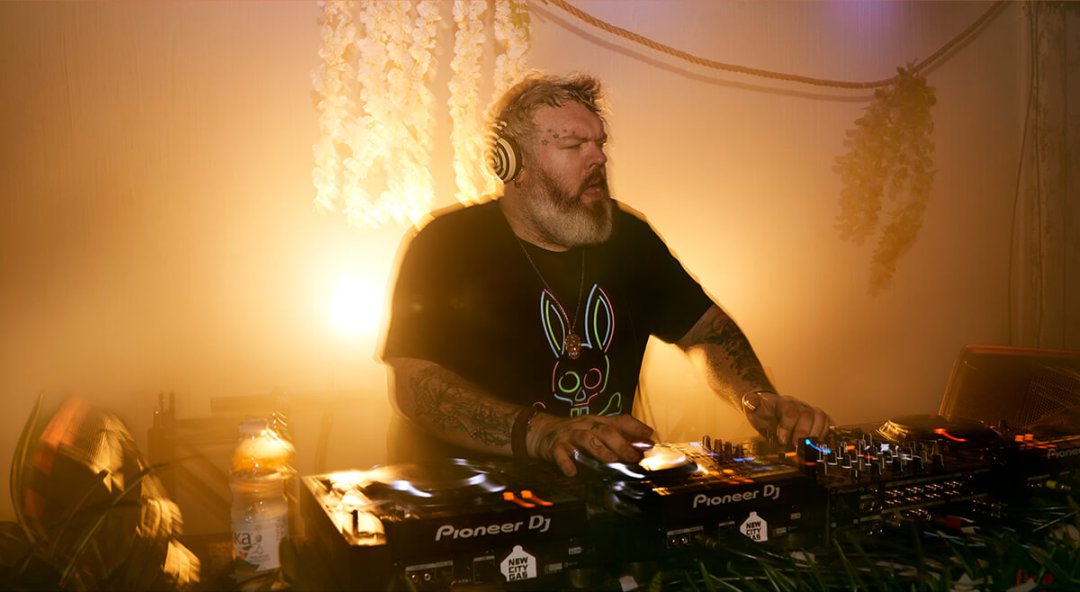 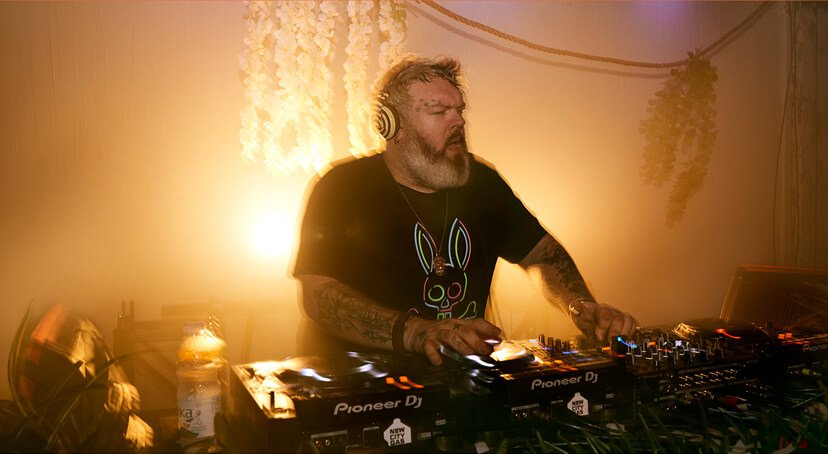 Have you always been that way, though? Like, how did you discover that you had this in you — that you wanted to be a performer despite being a private person?

I think a lot of the best performers are shy people. If you look at comedians you have to have a dark side to be able to have a funny side. It’s a dichotomy.

And, the more I think about it — I wouldn’t even call it performing, it’s just me being me — it’s a very natural part of me. I’m never more myself than when I’m on stage. But it’s a channel for me. There’s a conversation with the crowd when I’m playing. I’ve always been very emotional when it comes to music; when I play a track, I’m not just playing something — it’s a track I feel strongly about and when people react to it, it’s like they’re sending the energy back to me and it’s a beautiful thing. There’s no feeling in the world quite like it.

It was like giving the finger to people who
expected me to be a certain way.

It was like giving the finger to people who expected me to be a certain way.

When did you discover that magical feeling for the first time?

Well, when I was in university, I would’ve brought my friends into my room and played music for them — to show them parts I was excited about. They didn’t always hear what I did, though [laughs]. That’s pretty much how I would sum up my teenage years — that’s how I learned to communicate with my friends and people my age, through music, which is what I think makes me a good DJ.

Do you remember what your first gig was?

I do. This isn’t really a secret, but it’s not a story I’ve widely told — I was working as a drag performer. Being an almost 7-foot, generally large man, people wouldn’t expect me to do that. But I did what I wanted to. I made a creation that wasn’t particularly feminine — it was like a horror show drag. But it was like giving the finger to people who expected me to be a certain way, and it was like putting on a persona and giving me, a shy person, a way to perform behind a barrier at the time. That’s what gave me the confidence to DJ.

I was in the bar one night and the DJ was sick. The manager was panicking and I pretty much volunteered to fill in. I was, like, look, I have a huge music collection, do you want me to take over the ropes for a night. Since that night, I haven’t stopped DJing. I guess I did something right. I enjoyed it immensely. It wasn’t super busy, but I remember it and people seemed to enjoy what I was doing. 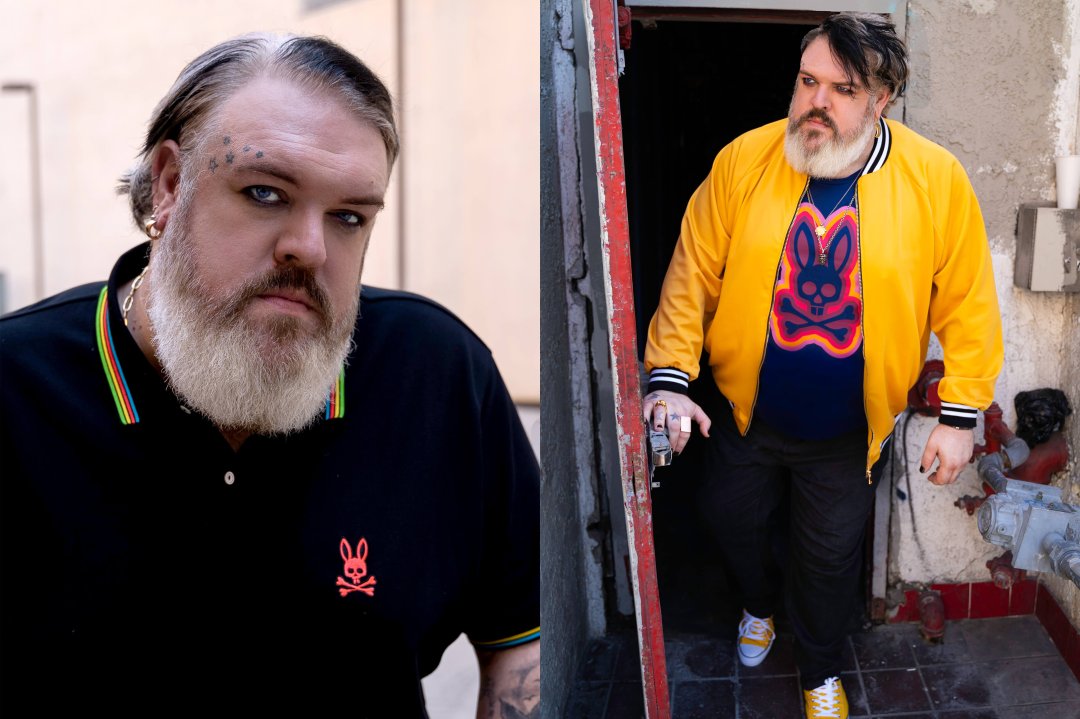 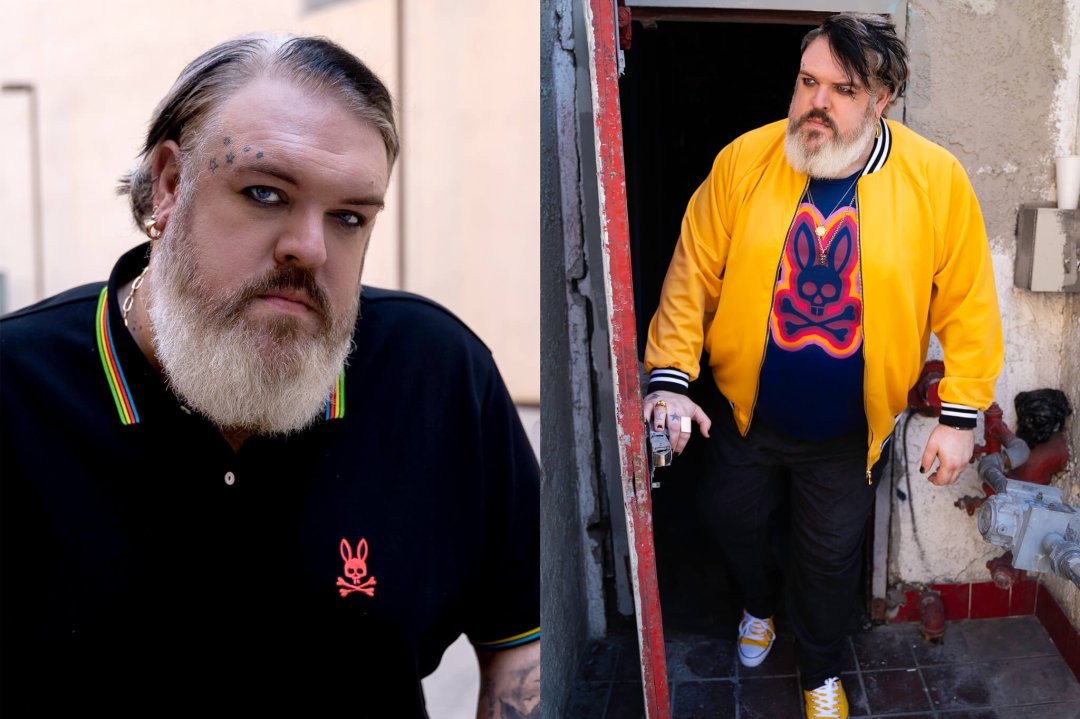 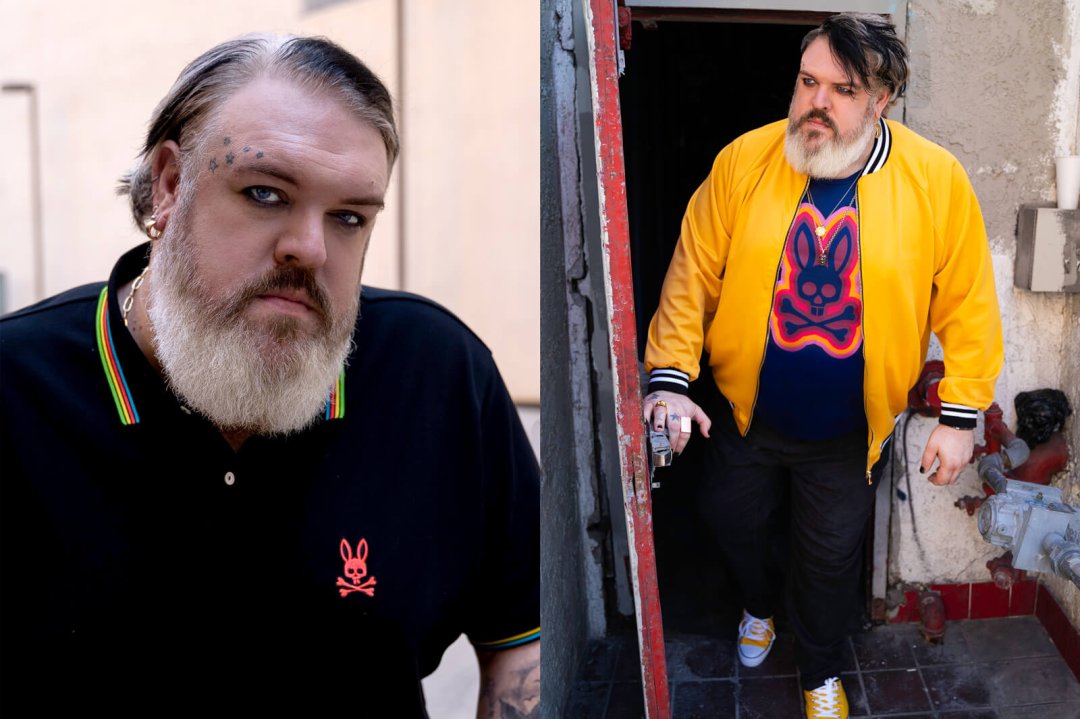 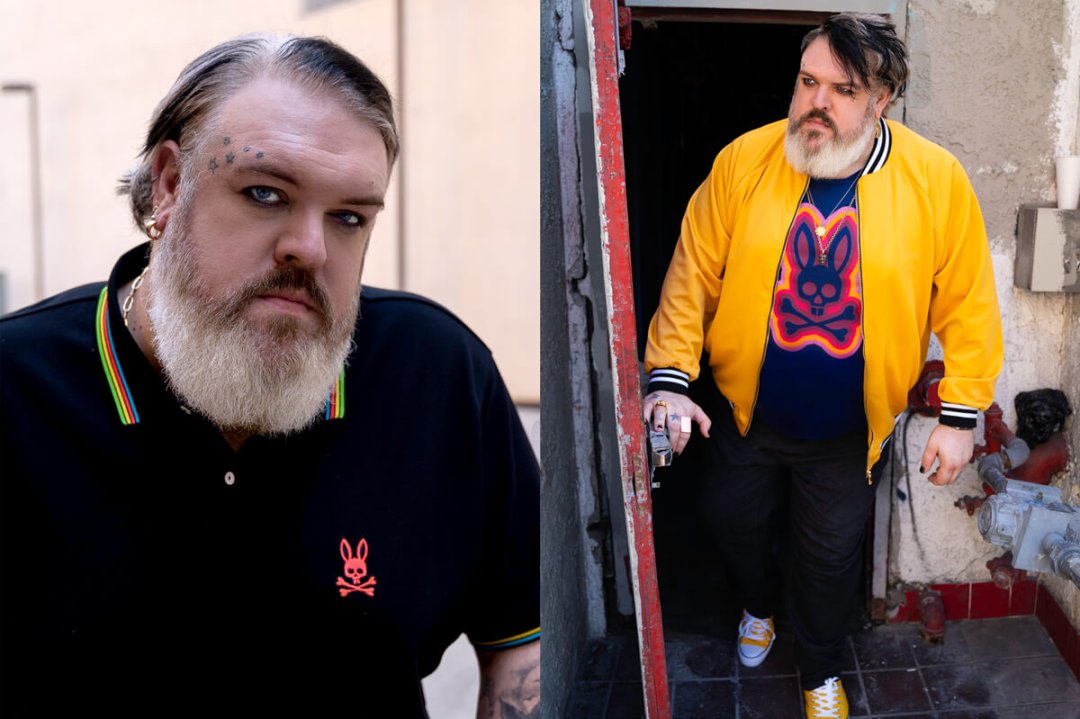 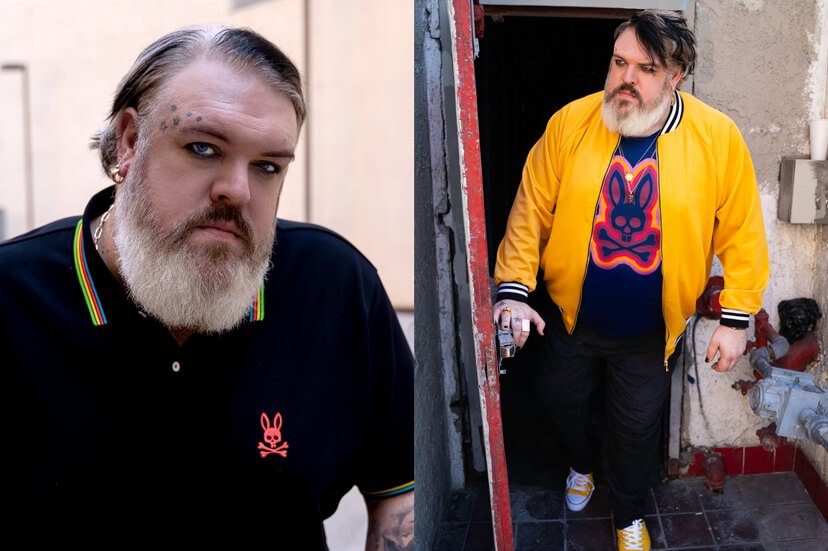 But was there anything that drew you towards it? Besides that moment of opportunity?

I was a club kid. I used to go out a lot. As a gay man, that’s how you found your tribe back then. I was there all the time and I had such immense respect for the DJs. I’d watch them all the time and here’s this one person who controls the energy and the room. That’s such a huge responsibility. For one person. I never thought I’d have the confidence to do that, but slowly I grew into it and moved away from doing drag into DJing. I didn’t need that barrier anymore — I was able to be myself and to use my skills to support myself.

Living your life waiting for people’s approval isn’t
a great way to live. I’m doing things that I want to do
and that I am proud of.

Living your life waiting for people’s approval isn’t a great way to live. I’m doing things that I want to do and that I am proud of.

Speaking of people expecting you to be a certain way and being surprised by how you actually are, is it hard being an actor — especially one who’s enjoyed quite a bit of fame — in such a tight-knit musical scene? Does it rub people the wrong way?

When I first got the part in Game of Thrones, the internet did some digging and found out that I was a DJ. And a lot of people assumed I wouldn’t be able to act and would be awful. And, then, about a year later, people were like “Oh, it’s Hodor from Game of Thrones and he wants to be a celebrity DJ and it’s going to be terrible!” I couldn’t win! But I was lucky that I had been a DJ for quite a long time and had worked with some pretty big names and they all came to my defence almost immediately.

I’m a good DJ — I’m not going to sell myself short. I’ve been doing this a long time and if I wasn’t skilled after 20 years, I should give it up. But sometimes people who aren’t as familiar with me are surprised that I actually know what I’m doing. So, I can’t lie, there has been some snobbery.

Does that kind of inspire you? Proving people wrong?

I don’t really do anything to prove people wrong. I’m not about proving people wrong or motivated by that. Some people, you’re never going to win over and I learned that at a very young age. Living your life waiting for people’s approval isn’t a great way to live. I’m doing things that I want to do and that I am proud of. If that proves people wrong — then so be it. 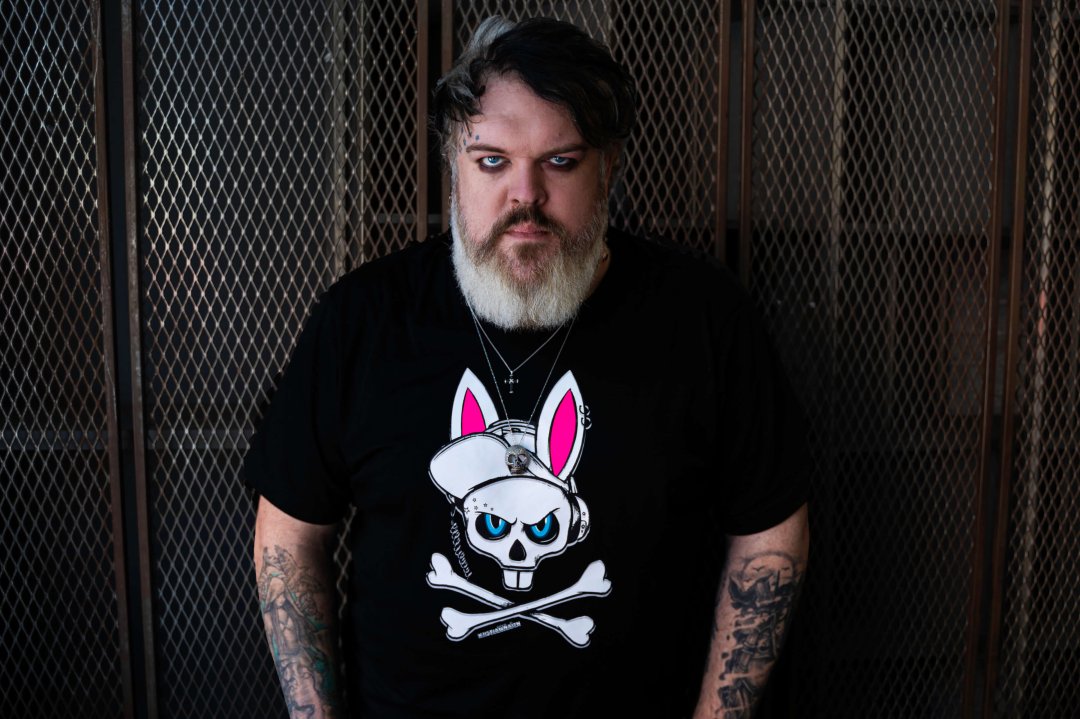 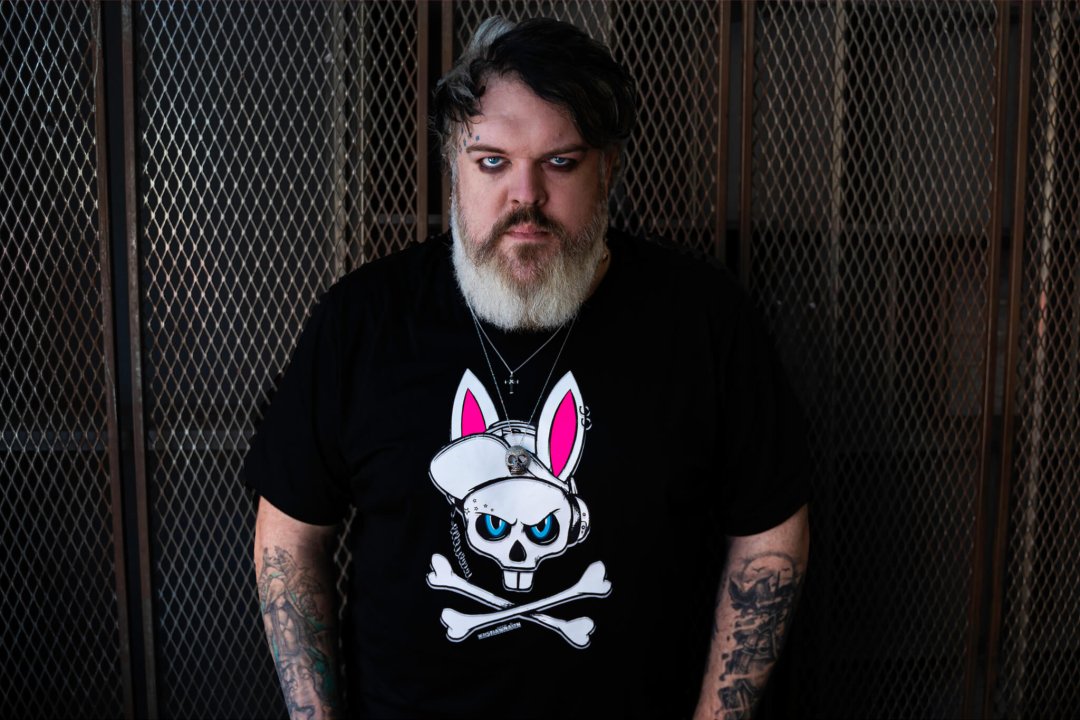 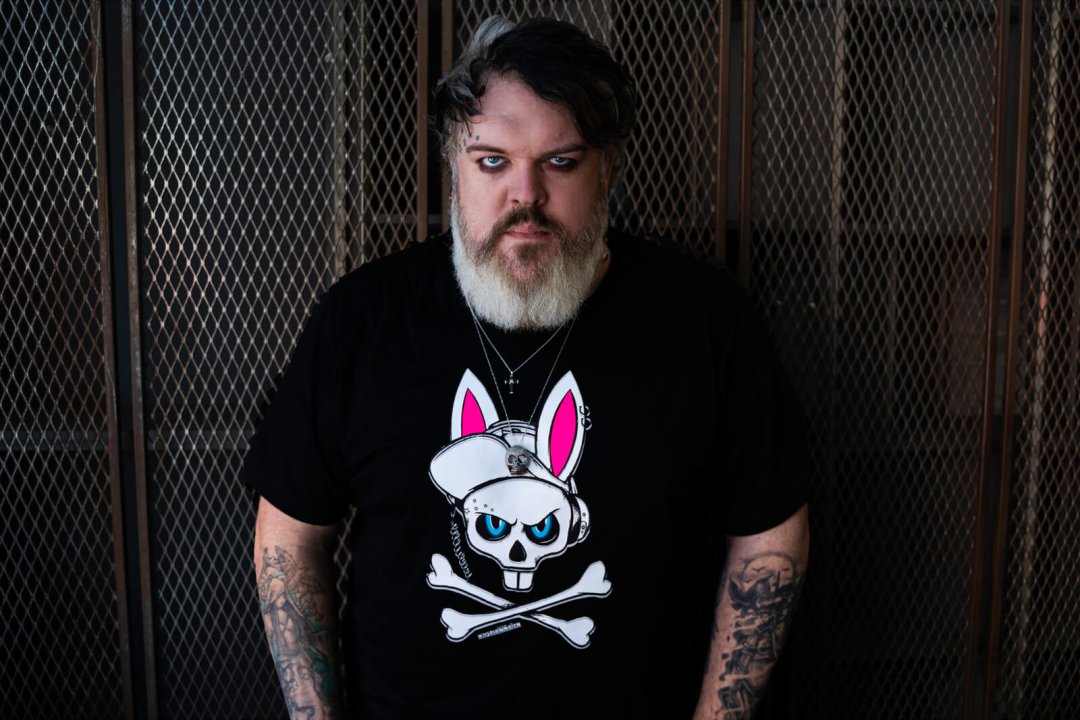 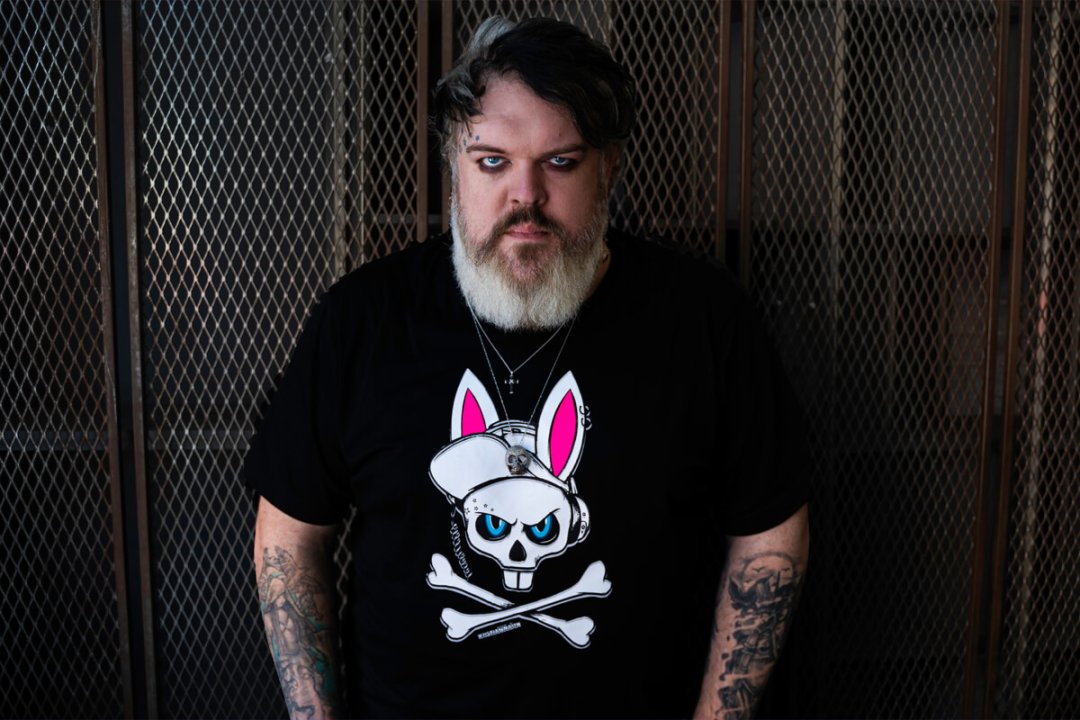 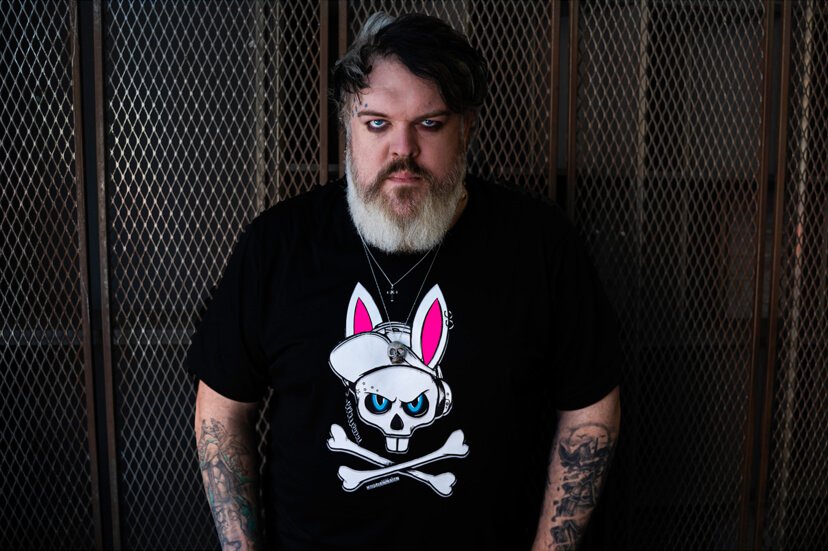 Speaking of people who are never going to be won over… what are your thoughts on how the last season of Game of Thrones was received?

I don’t think the criticism the show received was deserved. I think the last season was excellent. My only qualm was that I felt that it could’ve been a little longer — I missed the Game of Thrones of old that paid such attention to small details — like a ten-minute dialogue scene. But, because the clock was ticking and they’re heading towards a conclusion, it lost a bit of subtlety and that was something people loved about the show, it was a show where even the small characters had a role to play.

I do understand where people were coming from — I think people are mostly sad because the show’s over. But it had to finish eventually. It’s funny because I encounter that in my music, too — knowing when you have to just stop tinkering with something and tie the knot on it and present it to people.

It’s almost like a form of escapism; I love getting
into character when I’m acting, it’s like taking a
holiday from yourself, and, when I’m on stage,
you get lost in the music and you become this
hyped-up version of yourself.

It’s almost like a form of escapism; I love getting into character when I’m acting, it’s like taking a holiday from yourself, and, when I’m on stage, you get lost in the music and you become this hyped-up version of yourself.

Well, acting comes and goes, right? You can go months on end without having any new parts or without filming anything new. But I can always be working on new music and it lets me keep my creative juices flowing.

Creating singles is about reflecting who I am and what my sound is. I make music so that people who come to my gigs know what sound to expect. I come from a more classical background — guitar, piano, drums — so I put together the structure of the track in the software and then head to the studio and turn it into something. It can be never-ending, though — like, when do you stop tinkering with it? I’ve gotten over some insecurities about what music I feel is ready for people to hear.

He was one of the most beloved characters — though I have to say playing a villain can be incredibly fun — and there were so many memes that it’s hard to pick one. I mean, the whole “hold the door” thing was pretty memorable. My mum got me one of the doorstops and I find it pretty amazing that there’s an actual physical object born from that. 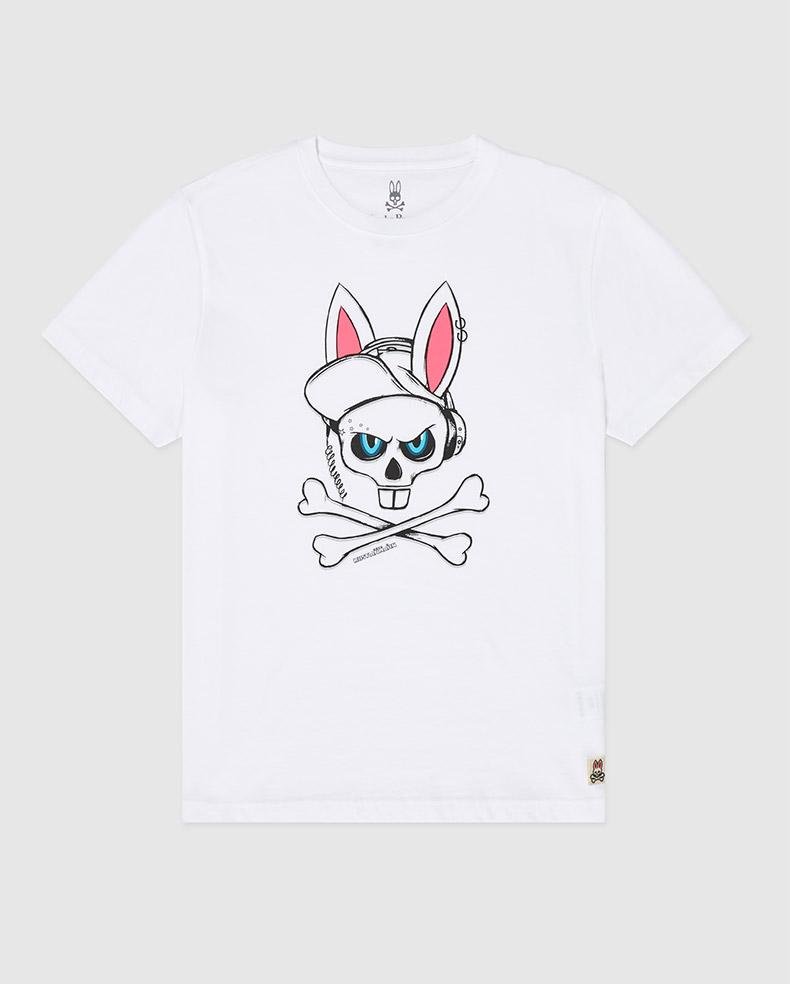 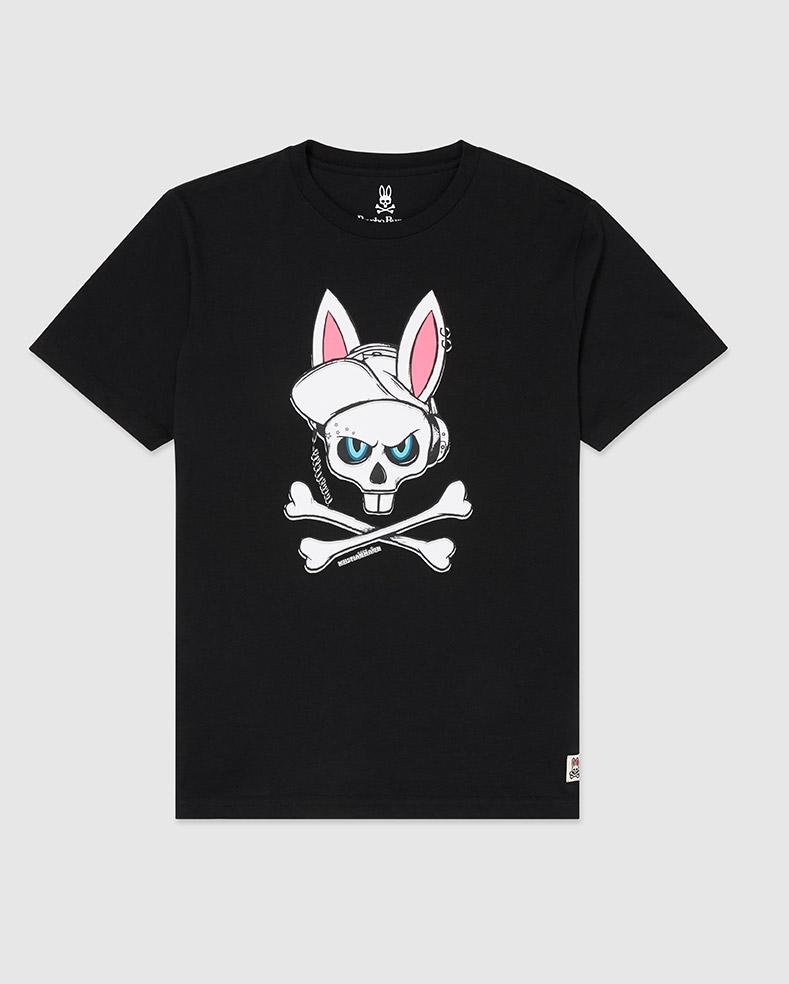 Keep up with Kristian here: Born from a mutual respect for one another, Psycho Bunny and Troubadour have come together to create a collection of bags crafted for the modern commuter, using waterproof zippers and fabrics, reinforced stitching, engineered electro-moulded memory foam and TechGuard pockets. Problem-solving 101 with a designer extraordinaire. Changing the way we think about things.