Eric Wertz doesn’t look like your typical dad. But that doesn’t make him any less of one. In fact, over the last five years, he’s become something of an example for other fathers thanks to his blog, BlueCollarPrep. What started as a simple hobby has become a window into the life of a modern American family man. And it’s allowed him to have a real impact on other people while also laying the groundwork for his own endeavours. 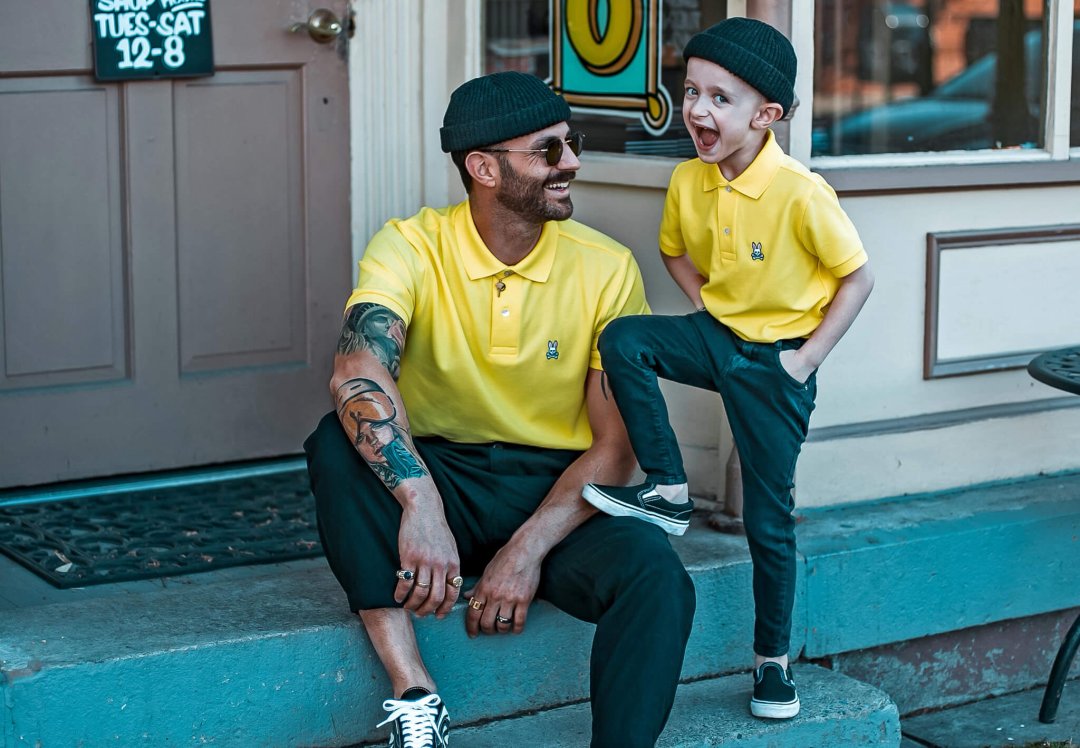 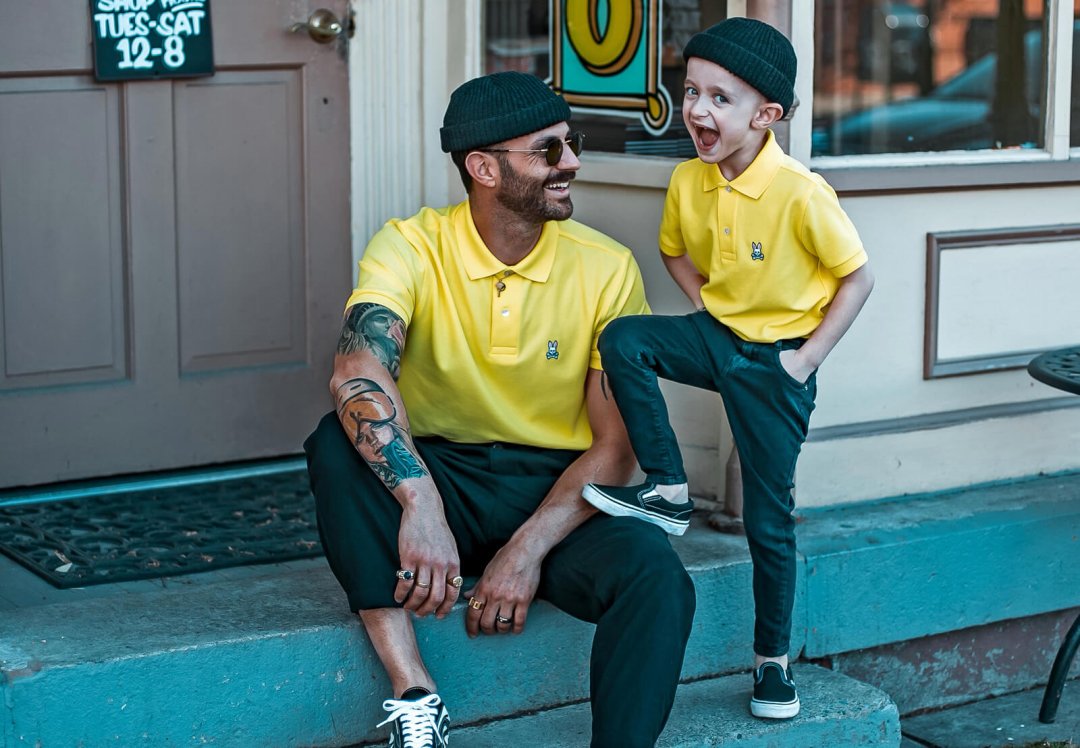 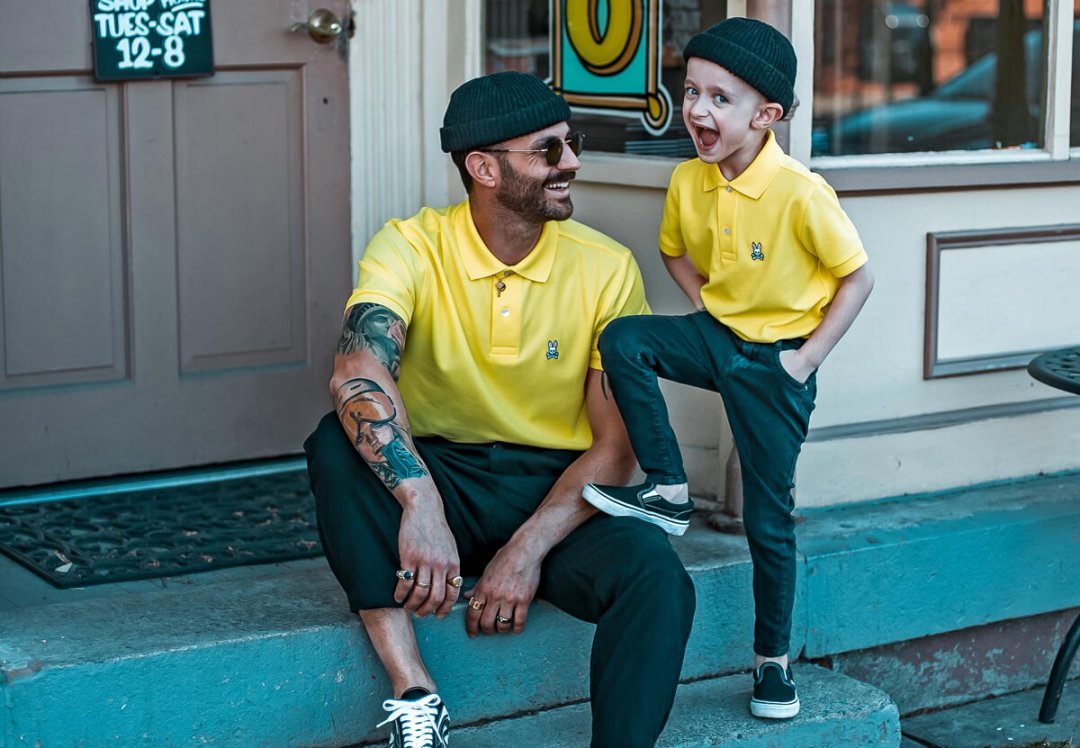 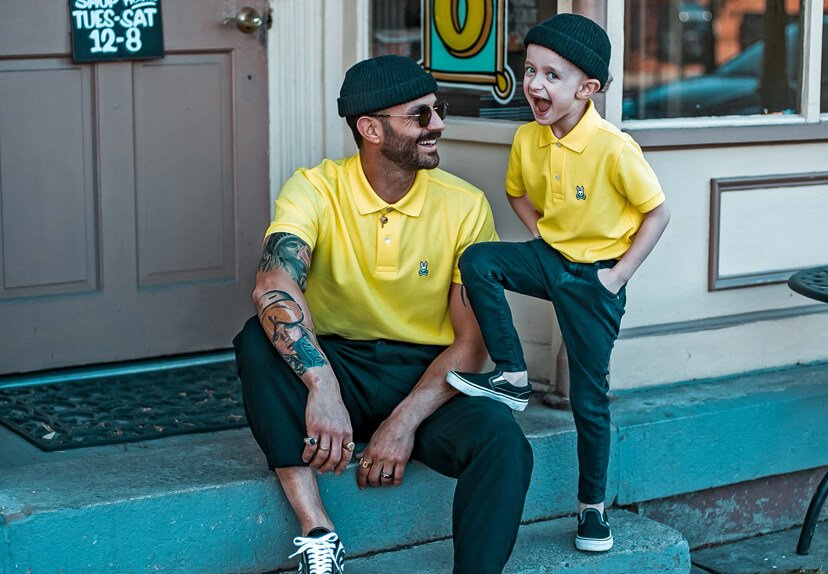 That’s not to say that there haven’t been bumps along the way—standing out, by definition, draws attention and not all of it is immediately positive. Eric hasn’t paid much mind to that, though. He’s been too focused on setting a good example for his son and spending time with his family. If you feel good about what you’re doing, why should you care about what others think?

We spoke to Eric about what it’s like to challenge notions about fatherhood, standing out from the crowd and so much more.

So—how did BlueCollarPrep come about? When did you realize that you wanted to create a platform to share the lifestyle side of being a father?

Around four or five years ago, my wife was working for a girls’ clothing brand and dealing with a lot of mommy bloggers. Nathan—our son—was, like, two at the time. So, my wife suggested that we start taking pictures to showcase my style. At first it was more of a fun hobby, but it’s grown and really started to snowball since then.

I’m still a full-time union electrician. It’s a double-edged sword, because there are great benefits and a pension—things that are hard to leave—but I don’t love it. I became an electrician because I had nothing really going on. I was working in an office and had just finished college. I hated office life. It was one of my buddies that convinced me to become an electrician.

People have reached out and said that they
appreciate that I’m a voice for this kind of atypical
dad. You don’t have to wear the dad jeans and you
can still have some swag and be a dad.

People have reached out and said that they appreciate that I’m a voice for this kind of atypical dad. You don’t have to wear the dad jeans and you can still have some swag and be a dad.

What did you study in college?

Growing up I wasn’t the best kid. I was good—but, in high school I started hanging out with the wrong crowd. So my mother was like, ‘just go to school and get a certificate.’ I started going to school for that and once I realized that I could do it and succeed in school—because I had such a hard time with school before that—I was like, well, let me go get a degree. So I got a business administration degree, which, again, wasn’t something I wanted to do. In high school, I always wanted to go to school for fashion—the goal was to go to F.I.T. and, to be honest, I don’t know where that fell off...

Well, I wouldn’t say it’s fallen off since fashion is such a big part of what you do. Plus, you’ve just launched your brand. It seems like fashion has always been important to you? Do you remember when you first realized that you cared about how you were dressed?

Probably around middle school. I lived in Brooklyn at the time and everybody was super into brands. And I couldn’t really afford the brands people were wearing, so I went with the bootleg stuff. But I always went for stuff in, like, bright colours. Looking back, I probably had the worst style ever. I remember my favourite outfit—my go-to—were these bright orange pants and a bright green polo shirt. It was just horrible. But I rocked it. 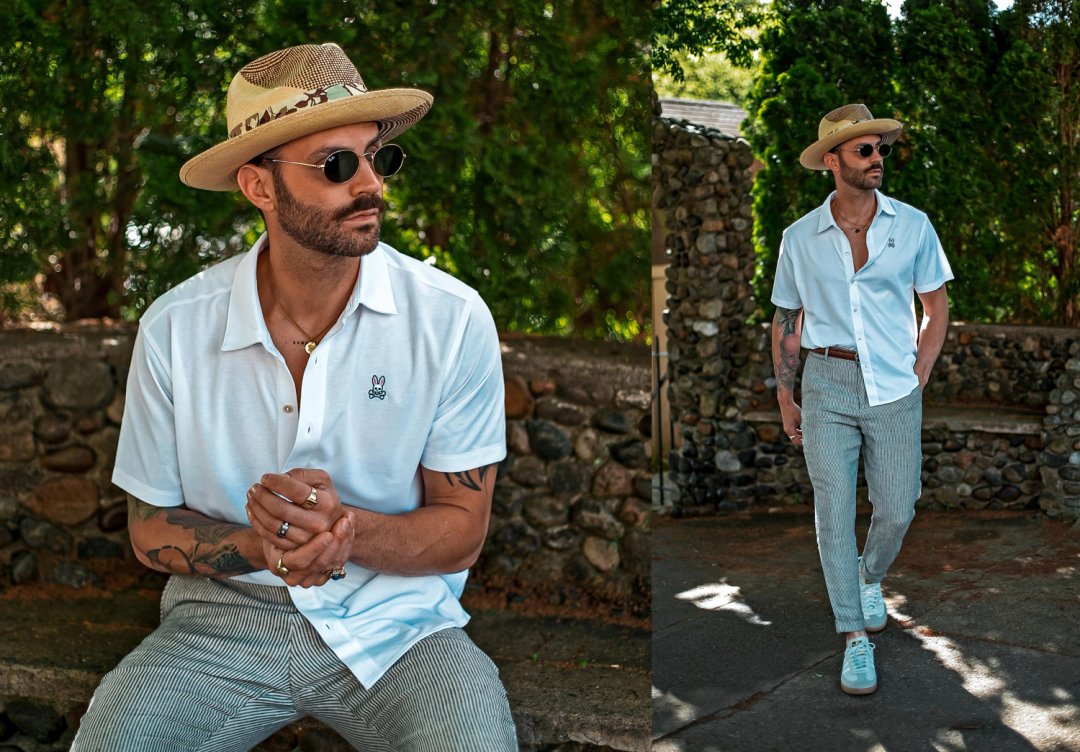 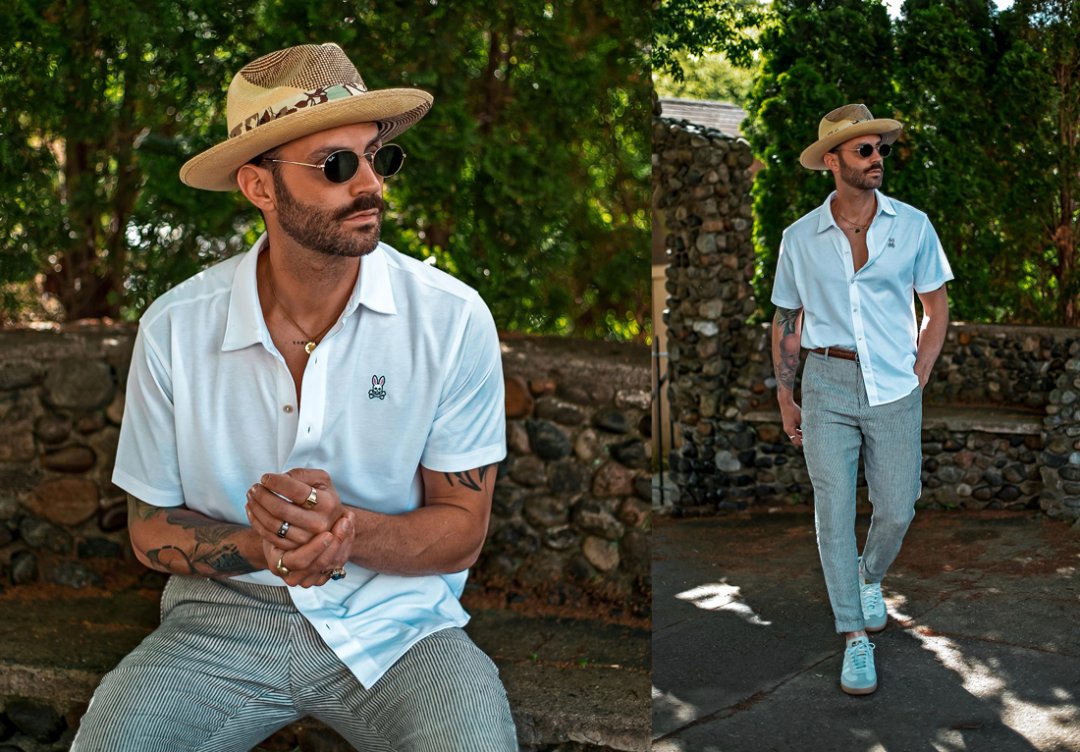 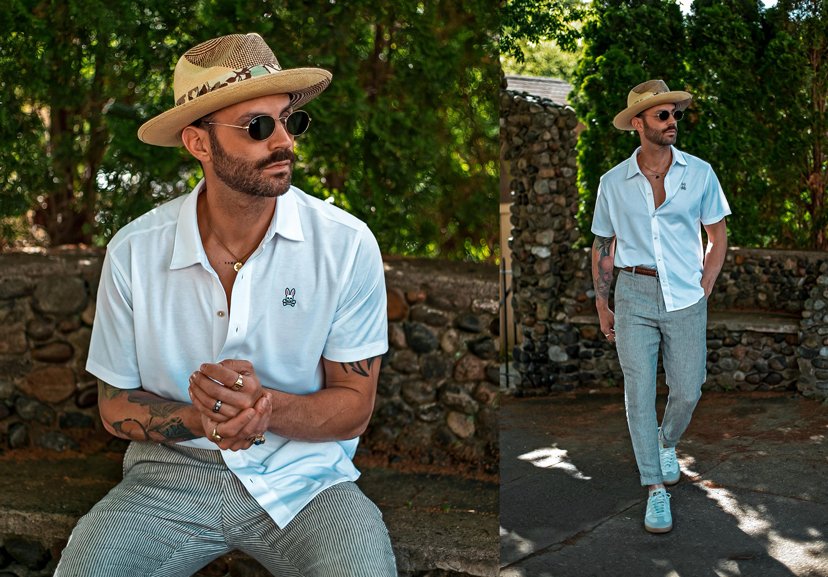 We say “horrible” in retrospect, but what’s important is that middle-school you felt good wearing it, right?

Yeah, I was feeling myself! I’ve always felt like I had a self-esteem problem growing up, but I always felt good when I got dressed up and that always helped me.

It sounds like you’ve always dressed to stand out and you still do. What’s that like, be-ing an electrician in suburban New York—I’m assuming that not too many of your co-workers are dressed the same as you?

A lot of people, when they see how I dress, they’re a little thrown off by it. When I started sharing stuff, most of the guys at work didn’t know about it. I didn’t really go around broad-casting it. Some of the guys I’m closer with would follow me and then they’d break my chops all the time about it. It wasn’t really accepted by them until they saw that I was able to actually be successful with it. Even some of my really close friends aren’t necessarily fashion-forward and they think I dress ridiculously. But then their wives will be like “what are you talking about? He has style. You guys are the ones that don’t have style.” 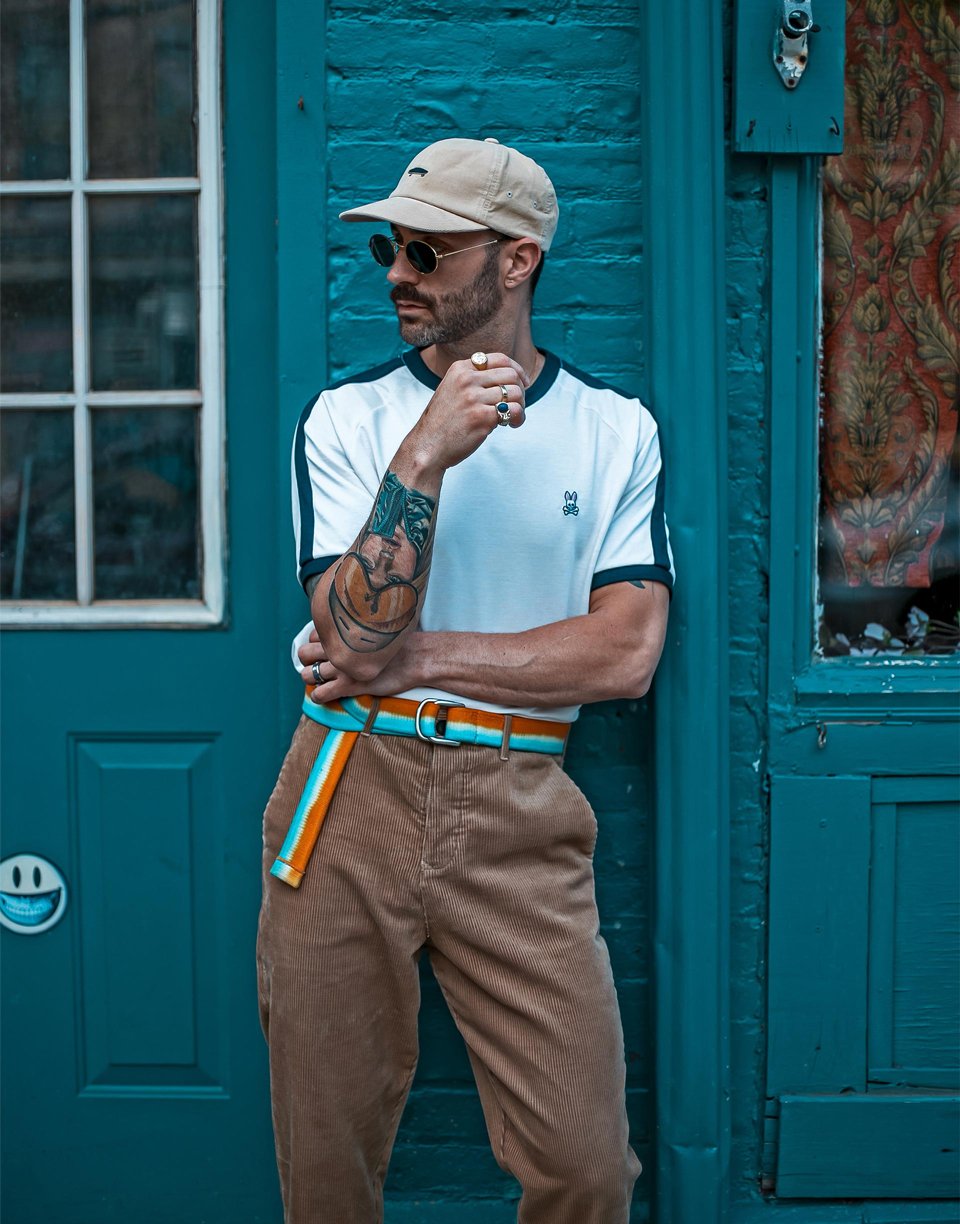 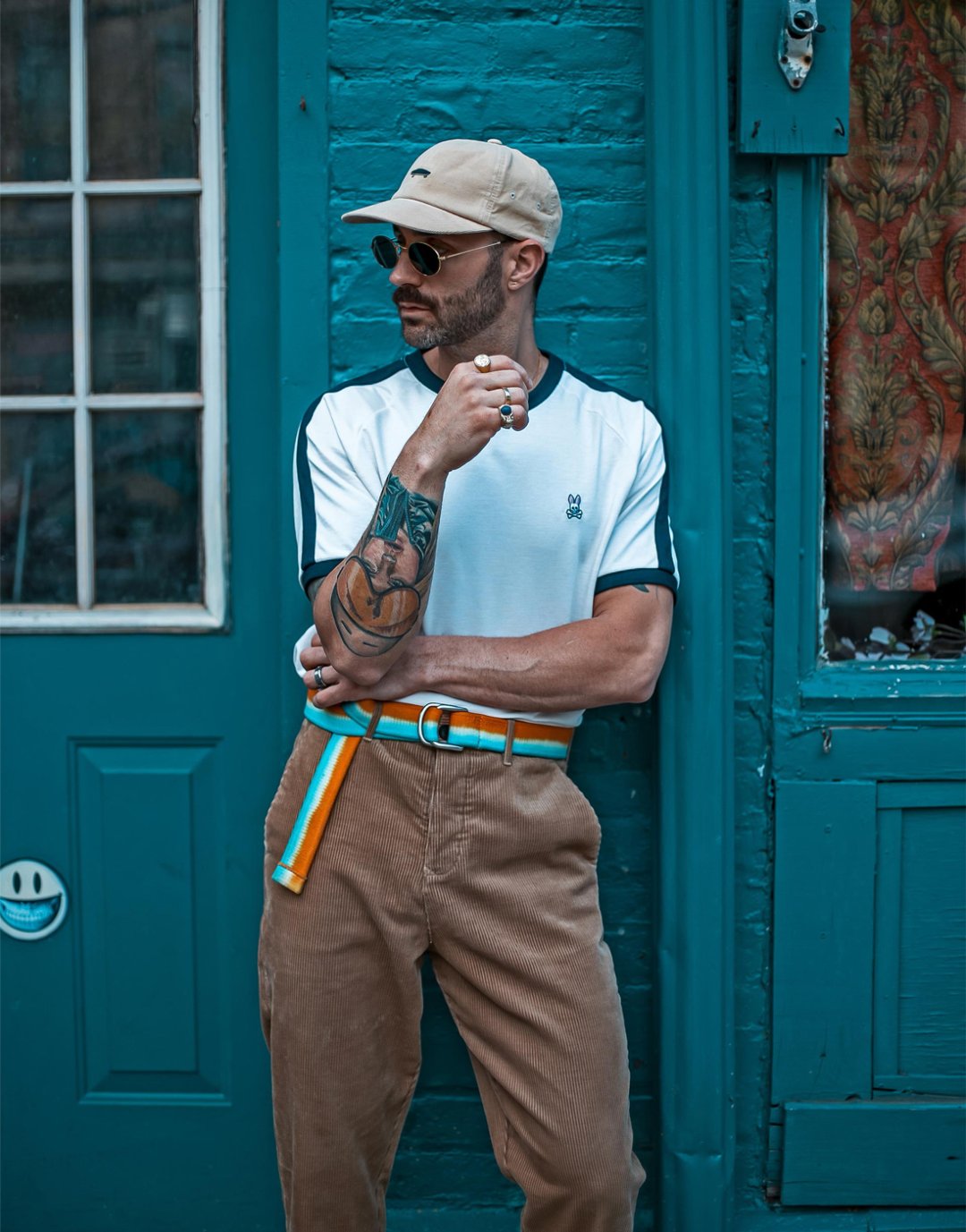 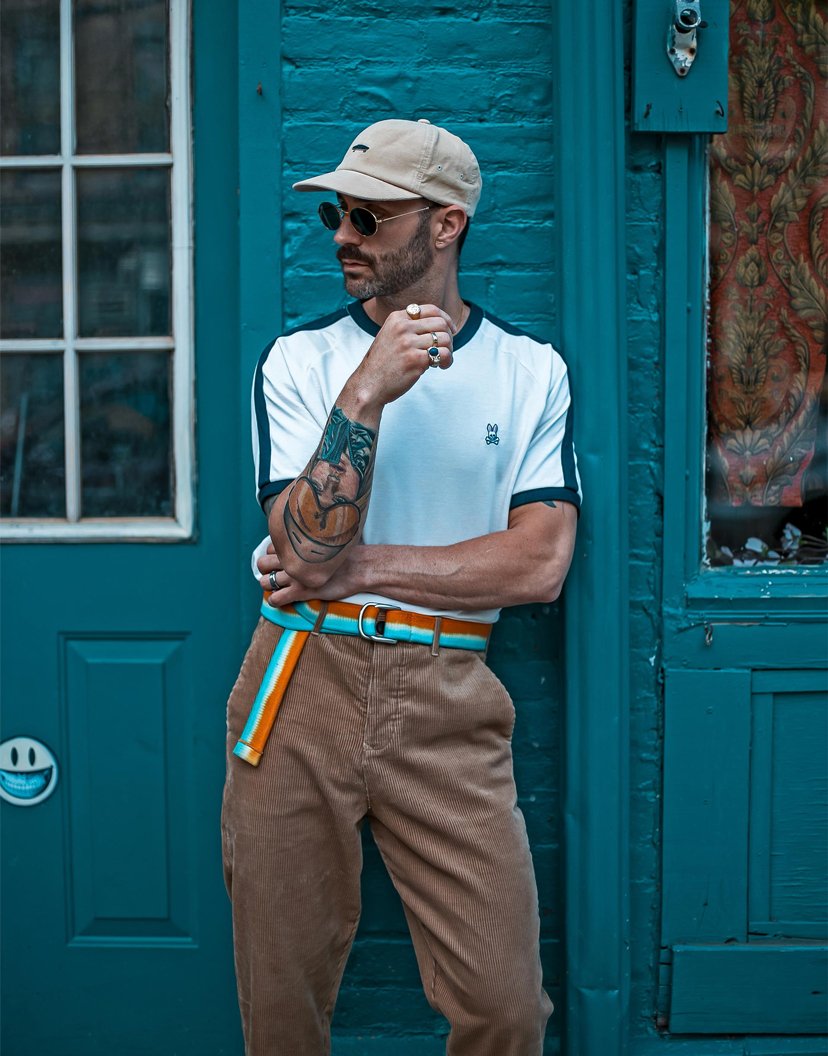 But that’s the best part, no? Do you kind of relish that? Proving people wrong, or con-tinuing to wear what you want, regardless of what they think?

It feels good knowing that I’m comfortable in my own skin. Being able to know that some people might not be into the way I dress, but knowing that I still have the confidence where I can feel good. Like I said, I had low self-esteem growing up, but clothes always seemed to make me feel comfortable.

It’s about more than clothes, though. I mean, you’ve kind of broken the mould a bit in terms of what people expect from fathers. You and your wife have shown a different side to parenting.

People have reached out and said that they appreciate that I’m a voice for this kind of atypical dad. You don’t have to wear the dad jeans and you can still have some swag and be a dad. I don’t know if I feel like I broke any moulds, though.

I was talking to my friend recently—and he’s never wanted kids—but I was telling him that it’s amazing because now I have someone I can do all my favourite things with. My friends might not be into skiing or hiking, but my son is. Now, I have that best bud that I can do everything with. I think I’m still a little immature—or mischievous might be a better word—and maybe my best bud being my son has something to with that. It’s great.

Every job I’ve ever had, it’s something I’ve felt
like I had to do because the opportunity was there
or I had nothing going on. But now I have this
creative outlet where I can one day, hopefully,
work with my wife full time and maybe have my
son involved and even take over. That’s kind of
what the dream is right now.

Every job I’ve ever had, it’s something I’ve felt like I had to do because the opportunity was there or I had nothing going on. But now I have this creative outlet where I can one day, hopefully, work with my wife full time and maybe have my son involved and even take over. That’s kind of what the dream is right now.

The overarching theme of what we’ve been talking about is this notion of doing things your own way—whether it’s how you dress, or getting into fashion without a traditional background, or being parents that integrate your son into your lifestyle. Do you hope that your son sees that and understands that it’s okay to be himself?

I do hope so. I hope he sees that I don’t worry about what other people think. As I see him growing up, he’s confident for other reasons. My son happens to be really smart—he has a photographic memory—and I think he gets a lot of confidence from thinking he’s the smartest person in the room… even when he’s around adults. But, I do still hope that I can instill in him to have confidence, no matter what other people think.

Do you see him starting to follow in your footsteps a bit?

I guess so. I think the outfits he ends up picking out are similar to what I would. He must see the way I dress and it rubs off on him. So let’s roll with that!

And I think he’s very competitive. In his mind—he wants to dress better than his dad.

I just posted a photo the other day where I was having a hard time picking out an outfit and he just walked around the store and picked out a shirt and a pair of pants and just knocked it out of the park. He definitely has an eye and he likes to dress good and he’s starting to get more into taking the photos, too. 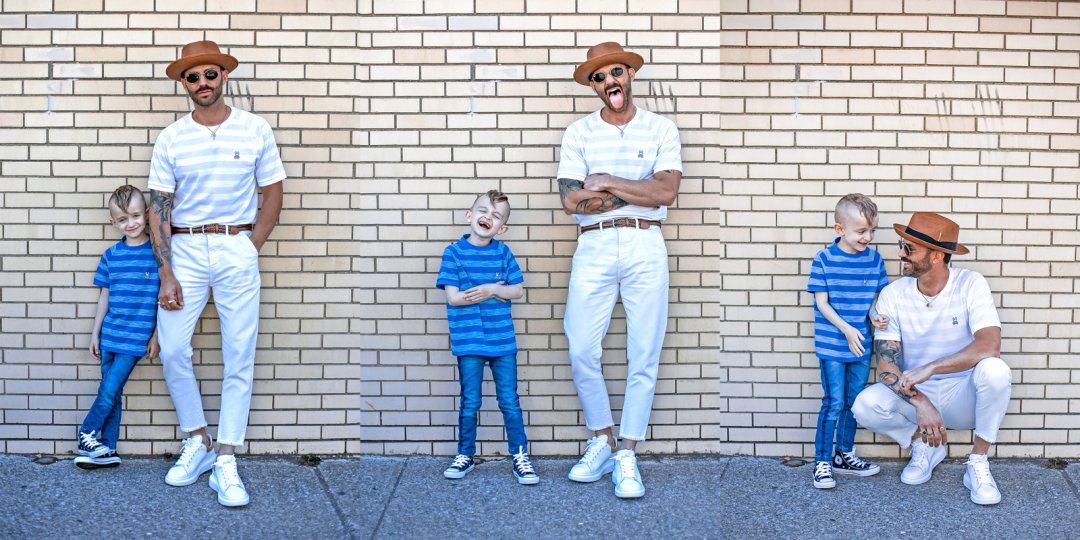 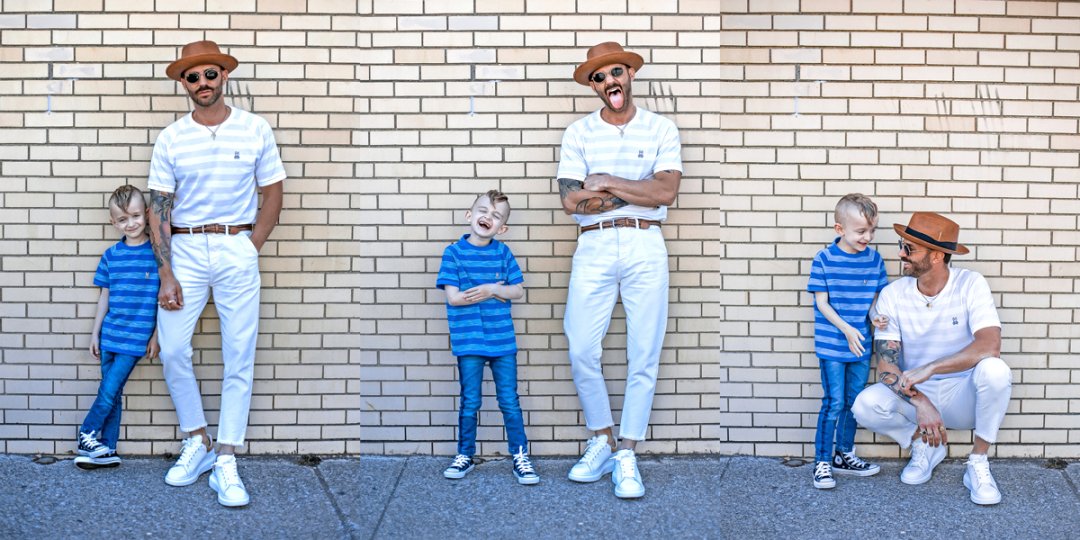 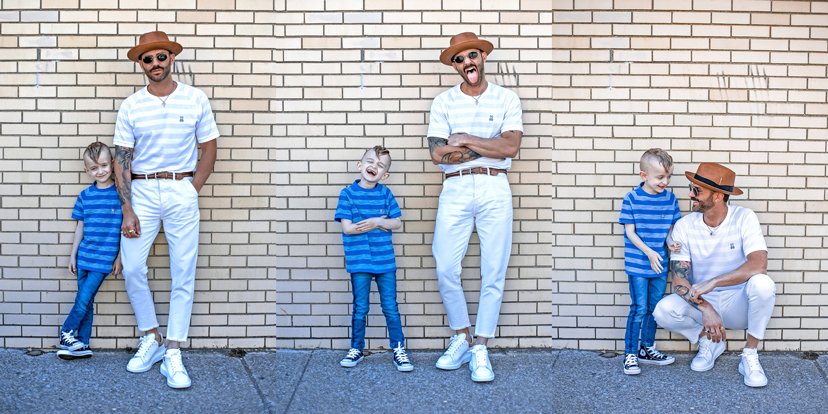 That must be a pretty amazing feeling.

Do you think one day, your son could pick up the mantle from you and your wife in terms of your creative projects?

A big part of why we’re starting a label is to have something for our son to take the reins one day. And it’s something that I really want to do. Every job I’ve ever had, it’s something I’ve felt like I had to do because the opportunity was there or I had nothing going on. But now I have this creative outlet where I can one day, hopefully, work with my wife full time and not have to go to something that I don’t love. And, to maybe have my son involved and even take over? That’s kind of what the dream is right now.

You’ve mentioned that theme a few times. Not really loving the jobs that you’ve had. Do you love what you’re doing with BlueCollarPrep?

Absolutely. Creating stuff for BlueCollarPrep is the one thing I’ve loved that’s brought me in-come. Like I said—it started as a hobby and I never thought it was going to take off the way it did. We’re kind of learning on the fly. We’re doing it to have fun. And we get to travel a lot as a family thanks to it. I think you really get to enjoy your family without any distractions when you’re travelling. So—yes, I absolutely love doing this.

Keep up with BlueCollarPrep here: Hanging out in Harlem with the host of Complex's Everyday Struggle show, talking music and the persistence it takes to make your dreams a reality. We head out to Nashville to talk cars and racing with a lifelong race car driver who has never given up on his need for speed.