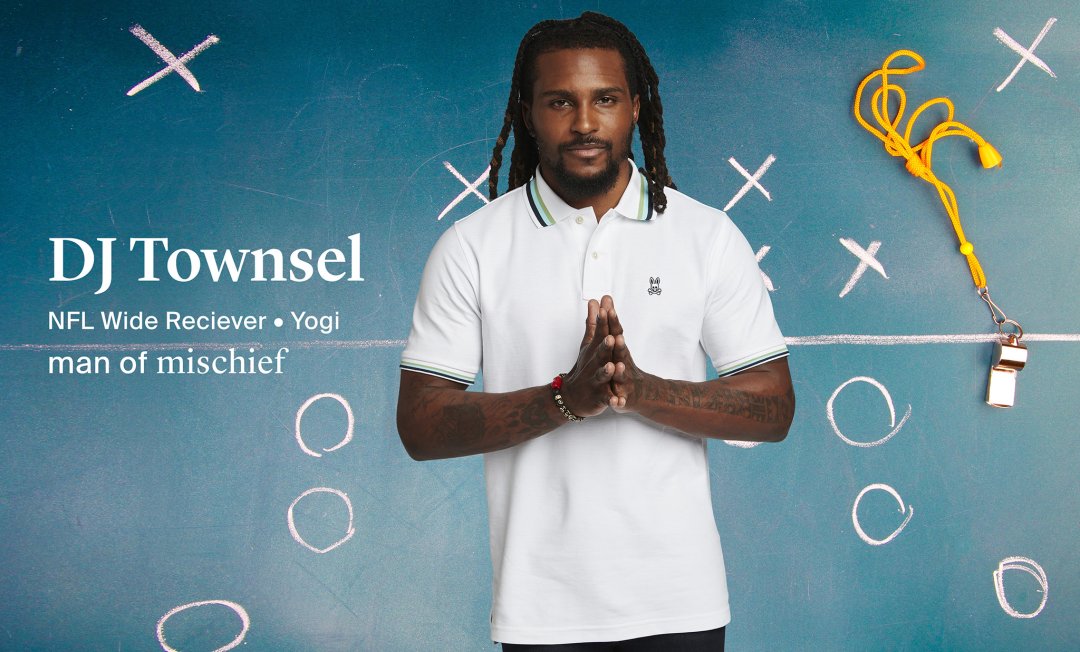 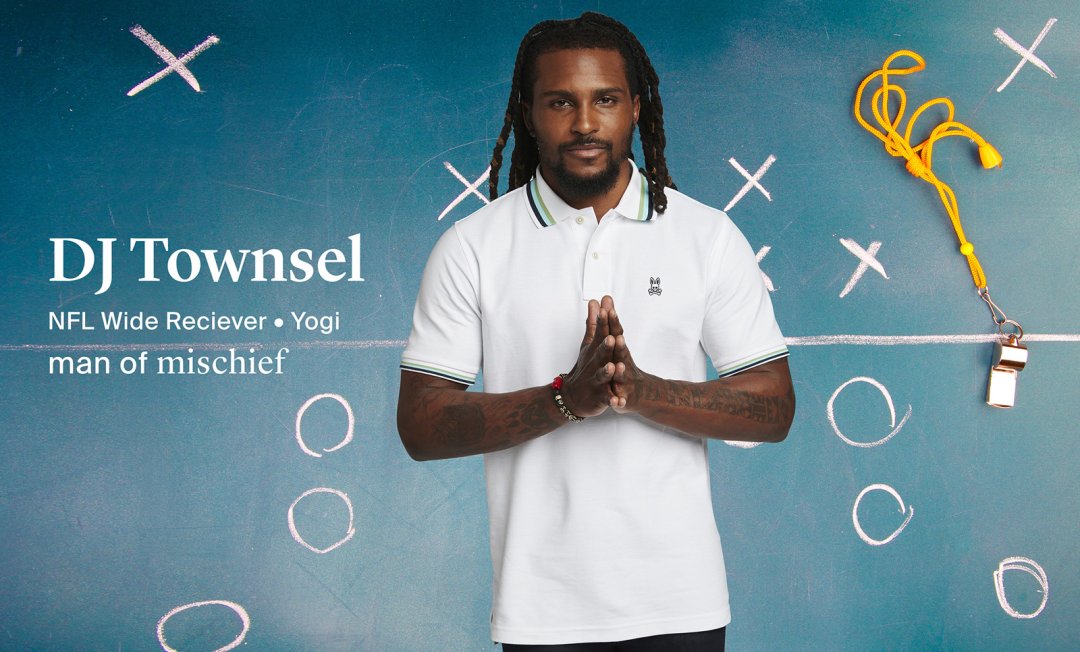 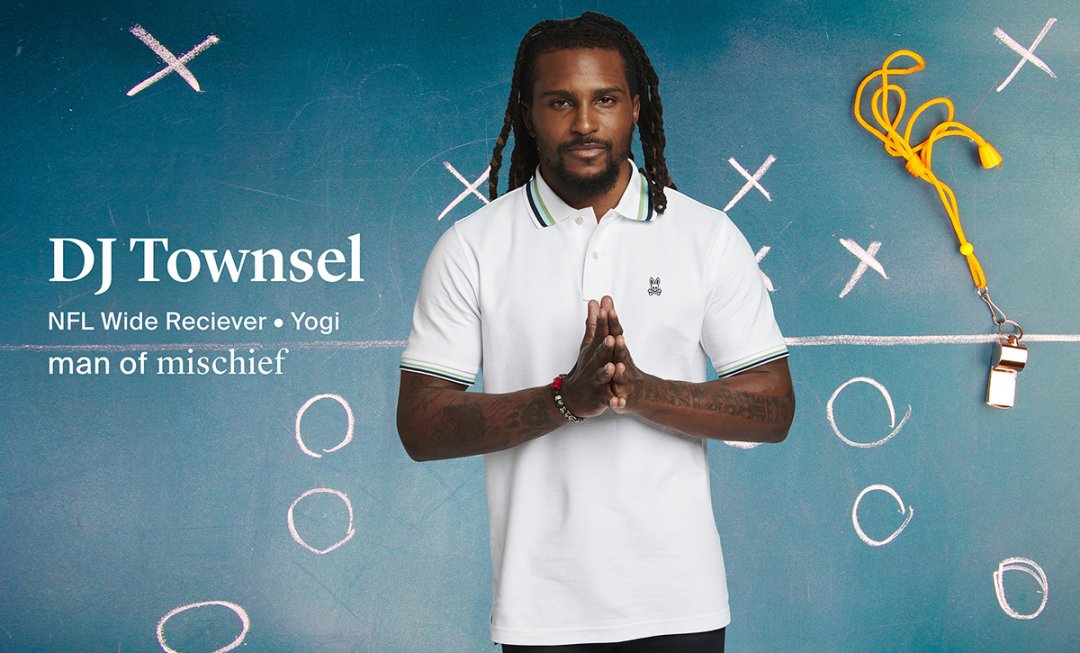 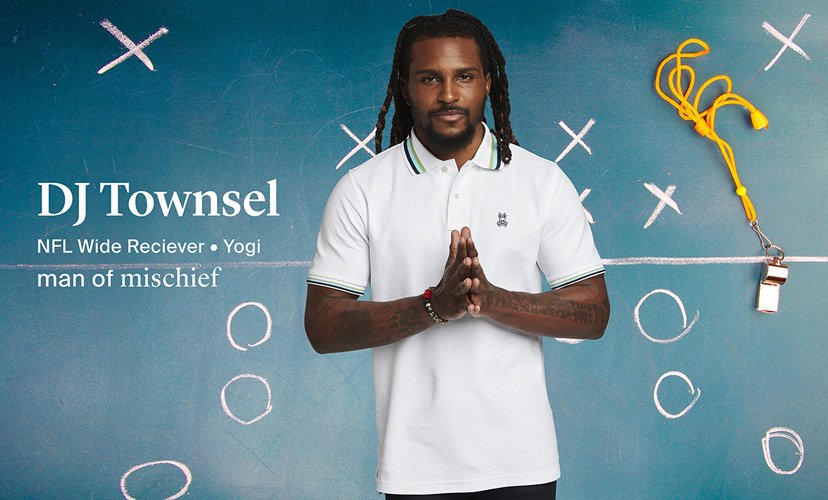 We often think that professional athletes are in the best shape, but ask DJ Townsel and he’ll tell you that’s not always the case. As a professional football player, DJ turned to yoga to keep his body limber. Since stepping away from the gridiron, yoga has become his lifestyle.

But DJ isn’t the only one who’s benefitted from it — so, too, have those he interacts with. In the seven years since he started practicing, DJ’s goal has gone from staying flexible to showing people that they, too, can turn to yoga to centre themselves.

You grew up playing football, right?

I actually only played in my junior and senior year of high school - that was it. I had always been interested in football, but my first sport was baseball. I was actually hunted down by my high school football coach, because he saw me playing baseball and he knew I was athletic. He walked me out to the field — to practice — because he knew I always said I would show up but never did. Two weeks later I was starting and, eventually, I became the first player from my high school to go on to the NFL.

But that’s how I started playing: My coach had to walk me to the field in junior year.

And, had you discovered yoga at that point?

God no! During high school, the only thing I was doing was playing baseball. And I was an artist — it was a performing arts high school. I didn’t hear the word yoga until I got to college. That’s not something you hear about, growing up in inner city Miami. 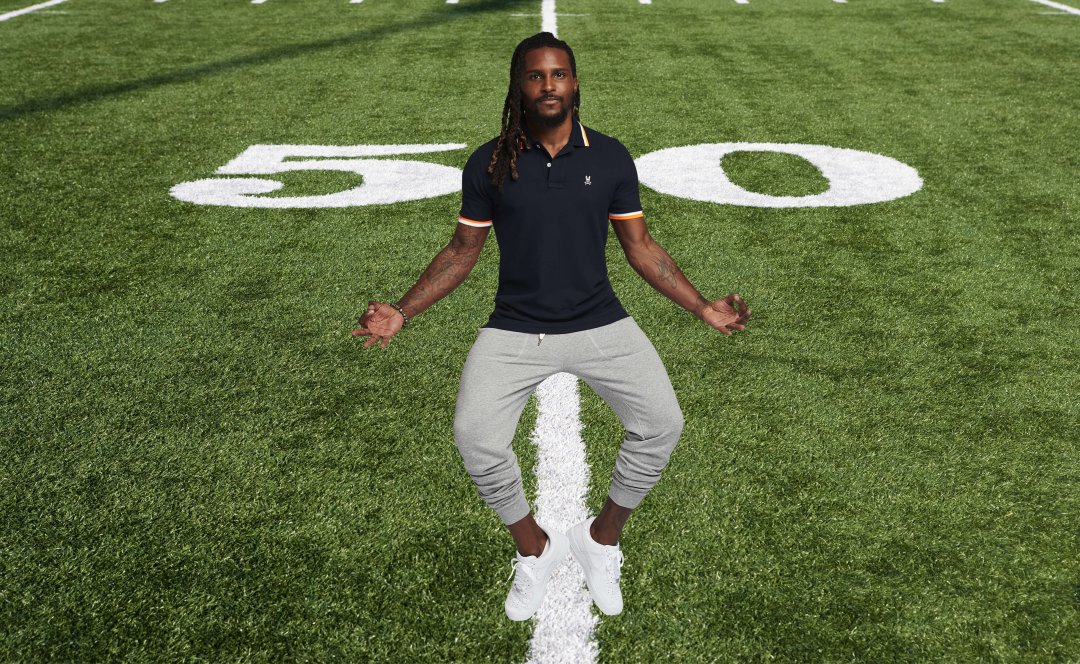 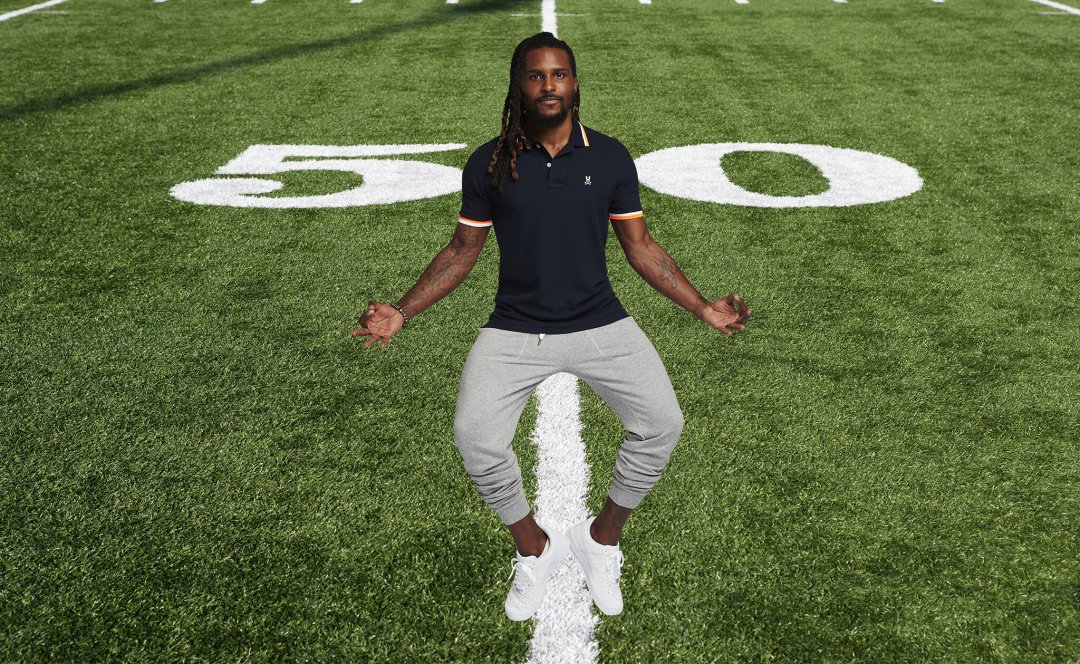 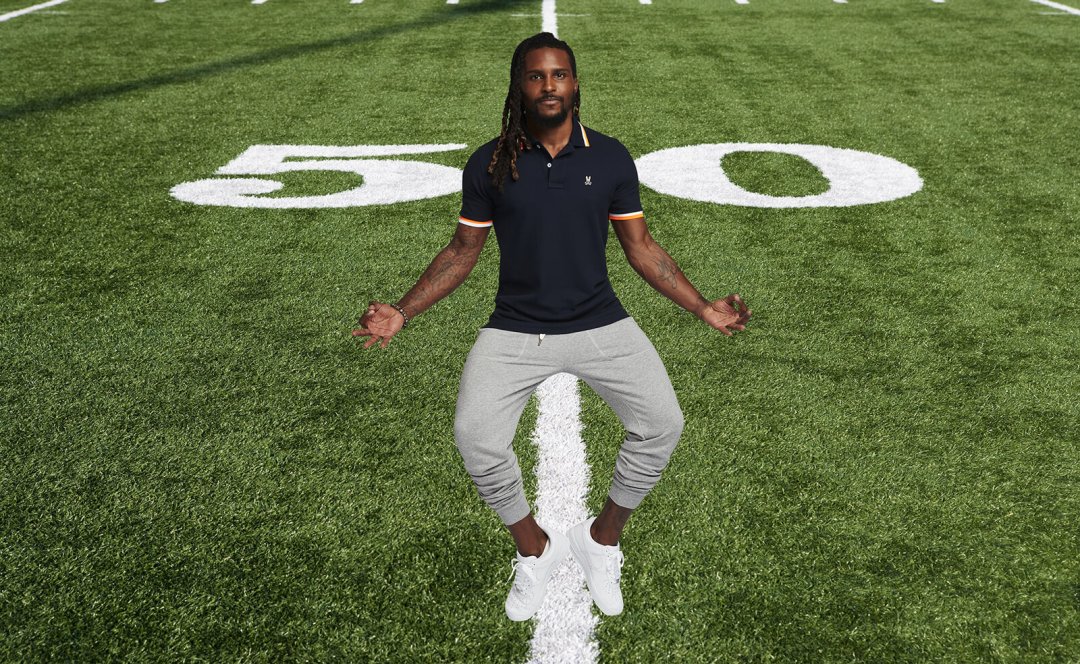 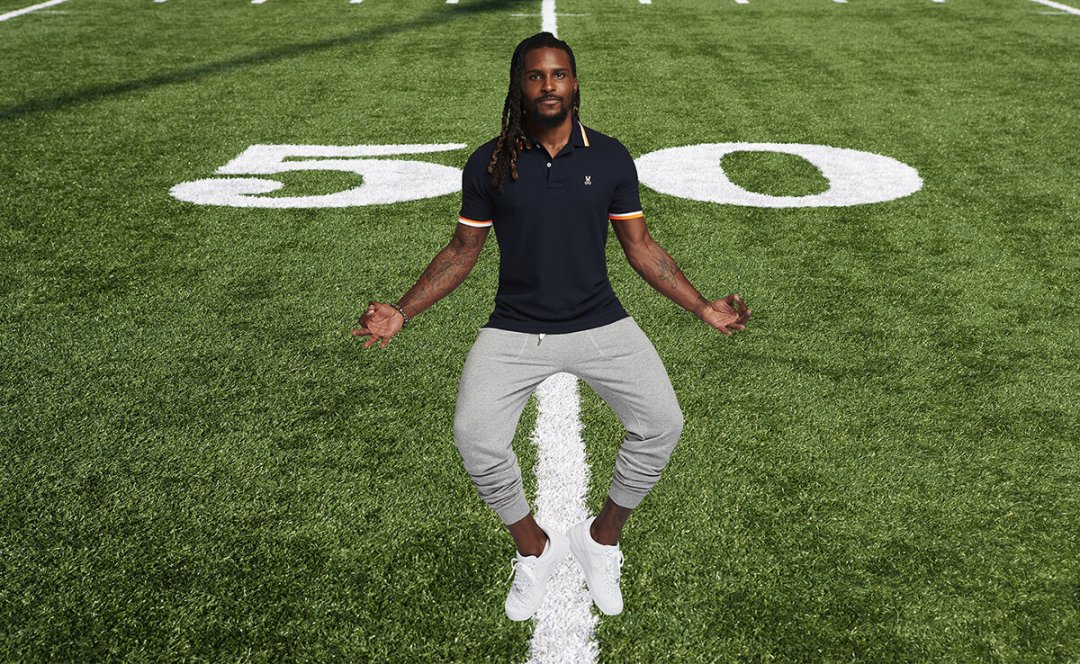 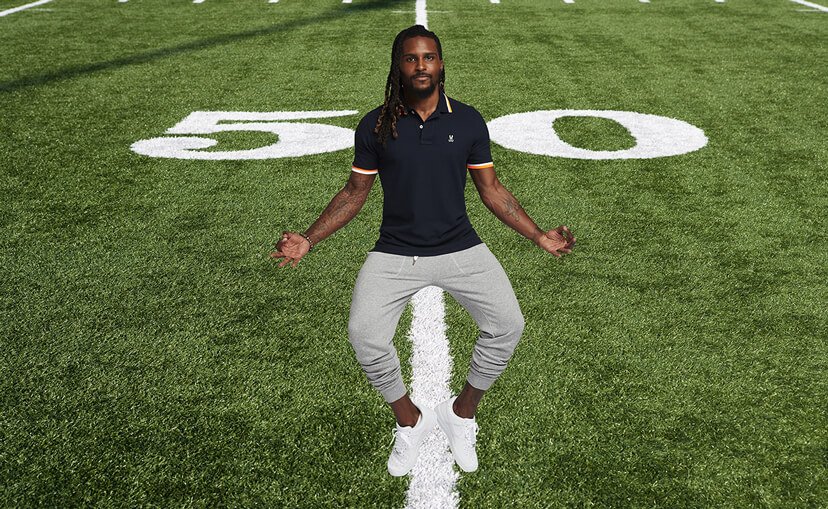 So, then how did you get into it?

It was only about seven years ago — when my professional football career was coming to an end. It was actually a preventative practice, because I was playing Arena Football, which is more closed-quarters. You’re surrounded by walls and you’re going to get hit by something — whether it’s the hard turf, the walls or someone else. So I needed to keep my body limber. I didn’t want to be stiff, because I never knew where the hits were going to come from; so instead of getting caught by surprise and getting injured, I started to practice yoga to get more limber and agile.

When I first started, I saw yoga in physical terms:
I was really focused on preventing my body from
being harmed and on recovering. Now, it’s a full
lifestyle: it’s something that I turn to in almost
any situation.

When I first started, I saw yoga in physical terms: I was really focused on preventing my body from being harmed and on recovering. Now, it’s a full lifestyle: it’s something that I turn to in almost any situation.

And have you noticed that there’s been a shift in terms of athletes embracing yoga and following in your footsteps a little?

Oh yeah, absolutely. In the last few years, there are guys that were playing when I was, or that are playing now, who are starting to get into yoga and asking me about things they can do to start. They’re trying to find practices to become more fluid. There’s been a huge increase and when you see guys like Russell Wilson and LeBron James doing it, it definitely helps normalize it.

Yoga’s very personal — solitary, even. Was that a big change for you? Going from two of the ultimate team sports — baseball and football — to something so solitary and lonely, where you’re tuning everything and everyone else out?

That’s actually what I needed! In football and baseball, your success is not only predicated on you. It’s up to a lot of people. At all times, you try to hold yourself accountable, but there are some situations that you just don’t have control over. In yoga, my consistency or my focus or my mediation, those are all things that I — and I alone — get to control. That’s predicated on me. It’s up to me.

I had never played an individual sport, before. It was a nice change; to be able to — and have to — depend on myself and only me. Whether I did it for seven weeks or seven years, whether it was downward dog or a handstand, it was all up to me and my work. 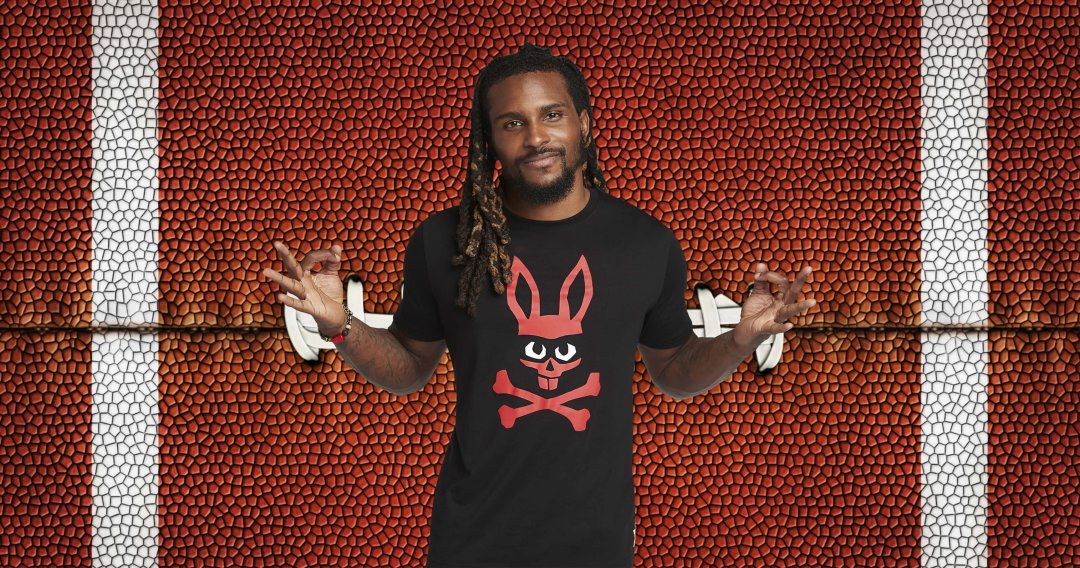 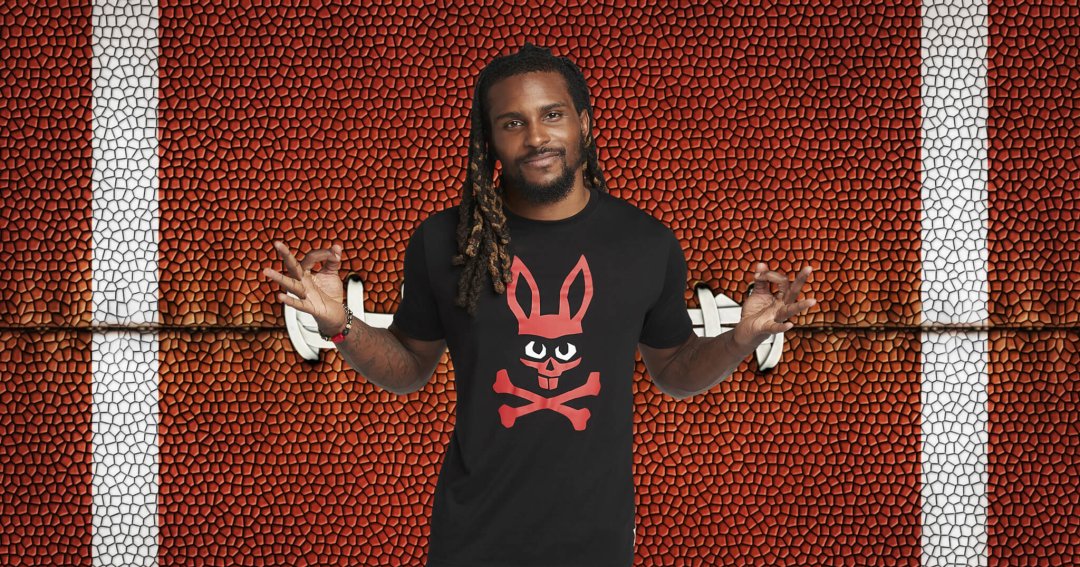 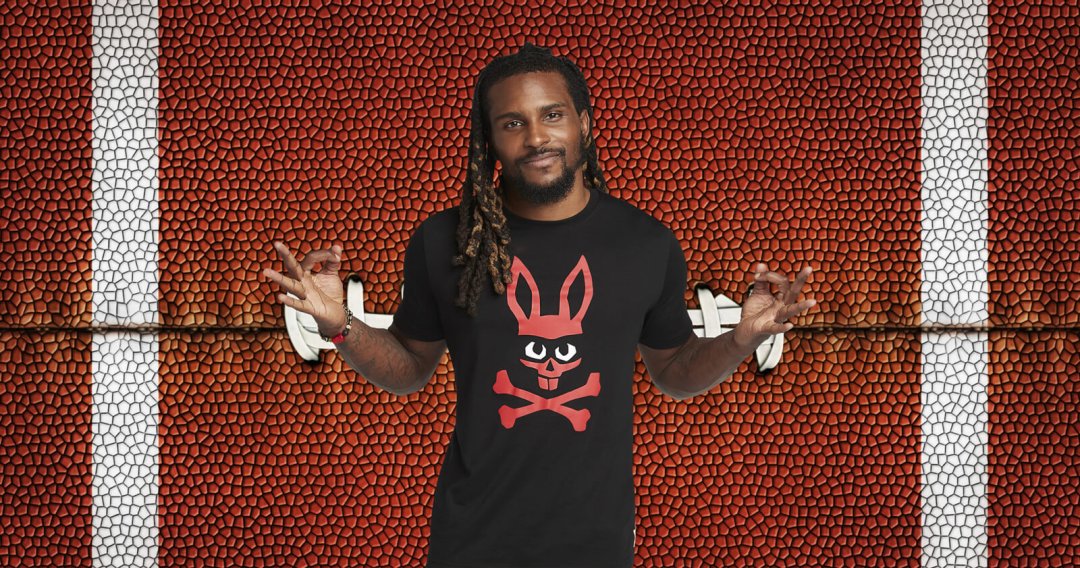 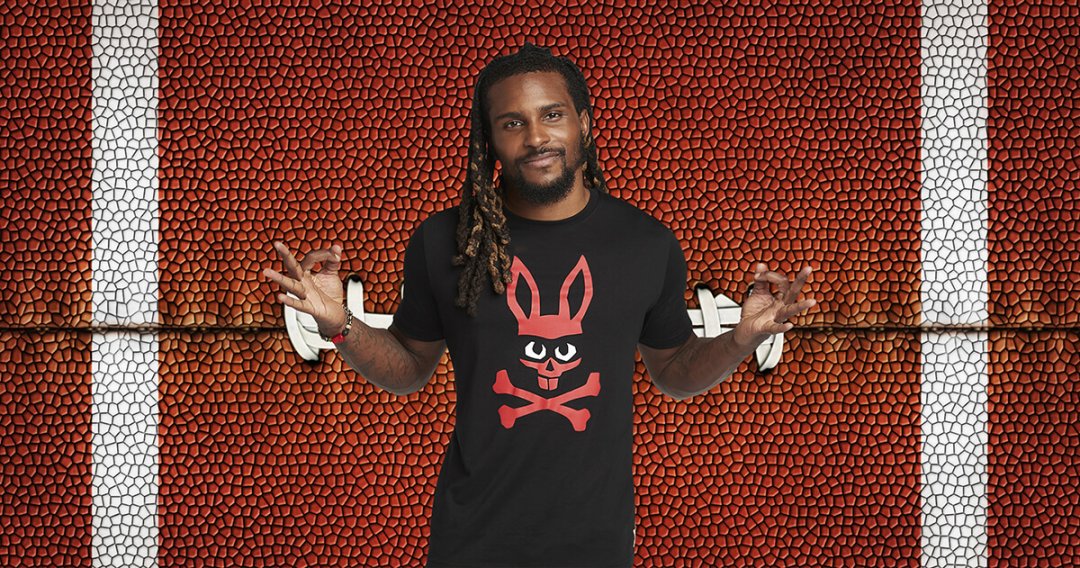 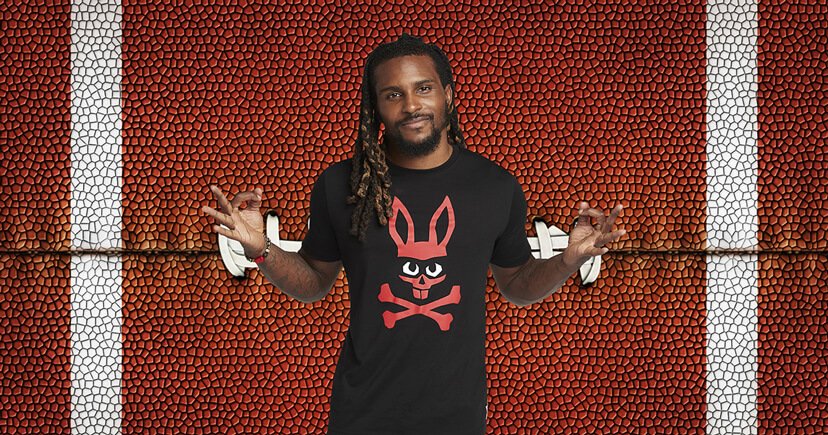 I think I realized I was a very competitive person. I always have been. If I saw someone doing something, I’d tell myself, ‘yeah, I can probably do that, too.’ But, what yoga does, is force you to surrender that; because there’s some stuff that your individual body might just not be ready for. That’s one thing I had to learn. It was a tough lesson. I had to surrender — whether it was controlling my breath, or coming to grips that my body might not be ready for something. That was a tough lesson.

So do you see it as something that’s not just purely physical?

When I first started, I saw yoga in physical terms: I was really focused on preventing my body from being harmed and on recovering. Now, it’s a full lifestyle: it’s something that I turn to in almost any situation. Whether it’s physical, mental, spiritual, emotional — whatever I’m dealing with, yoga is the first thing that I turn to. The physical side can be frustrating at the beginning of the practice, when that’s all you know or all you’re aware of; but once you start to delve into the practice and understand what it’s about, the task becomes more mental and emotional than anything.

What would you say the hardest part about yoga is? You mentioned the hard knocks being the hard part of playing football, but what makes being a yogi difficult and frustrating at times?

I would say it’s definitely the mental side, because you still have to live life and with life come obstacles, right? Whether it’s a relationship or bills, or work or your schedule. The hardest thing is not succumbing to those emotions. Even though there’s nothing wrong with having emotions, you try to avoid over-reacting or being too quick to react to something. I always come back to breathing — if I’m peeved about something, I’ll stop and breathe for a couple minutes. 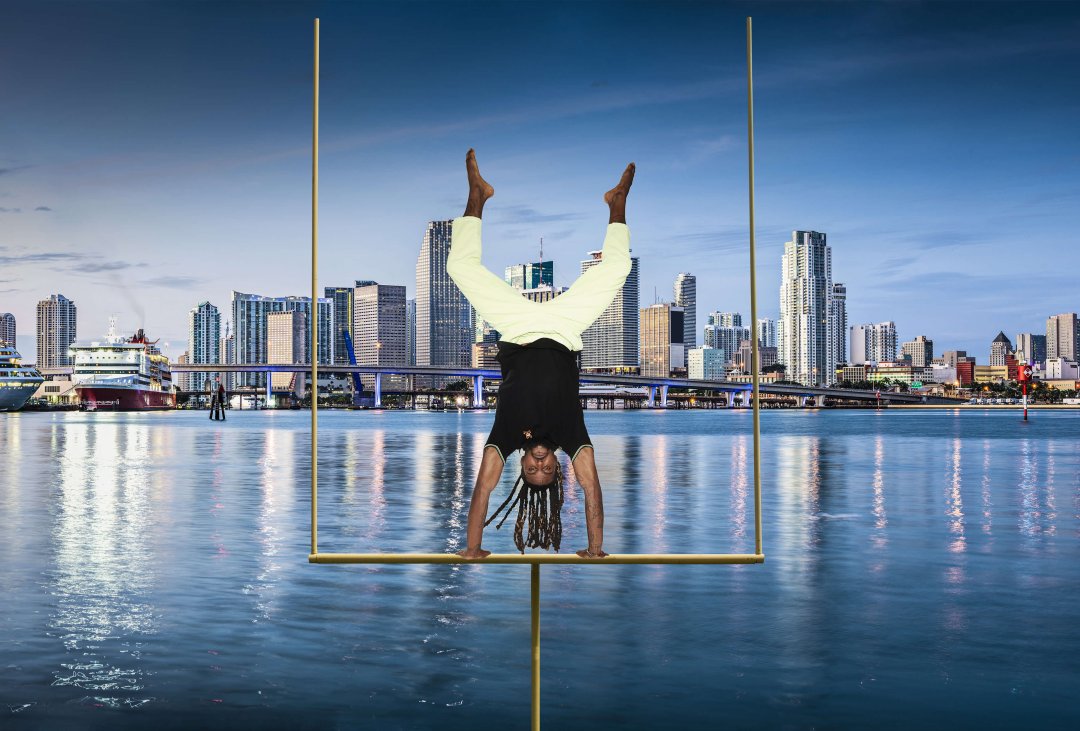 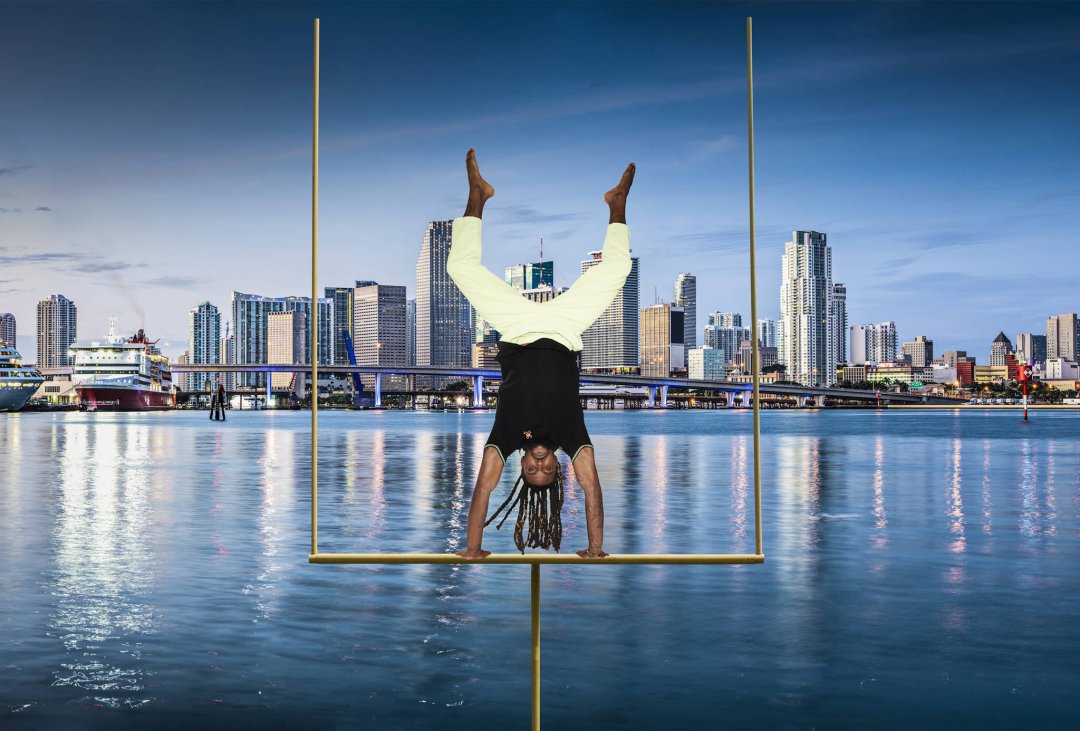 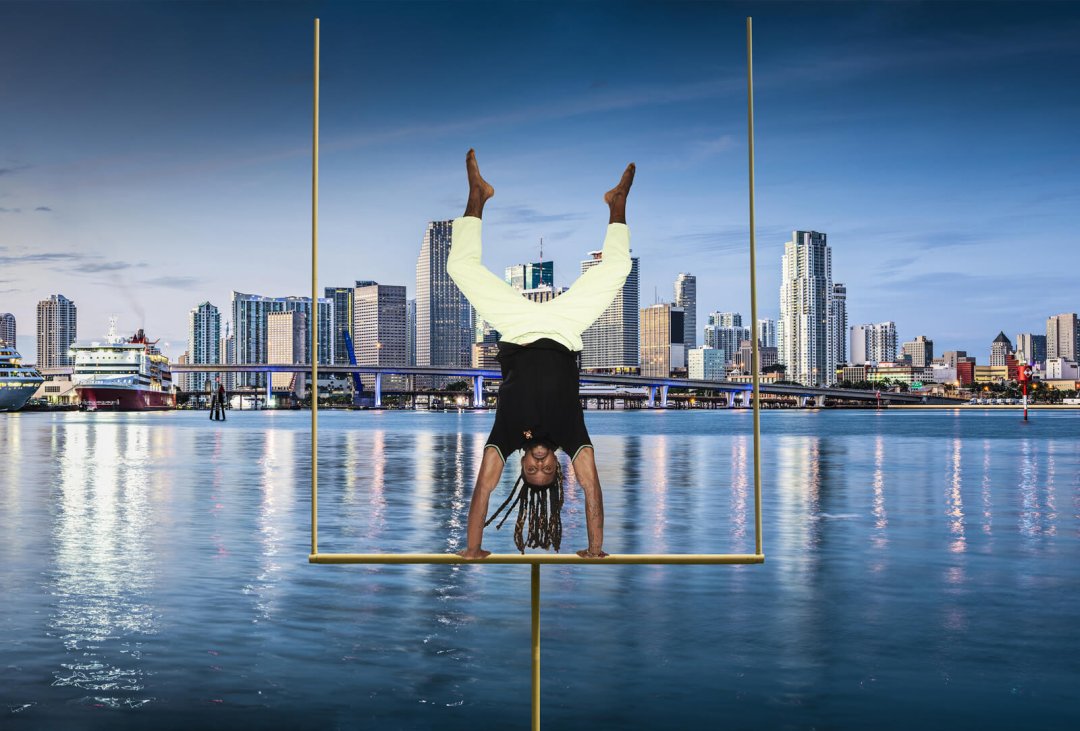 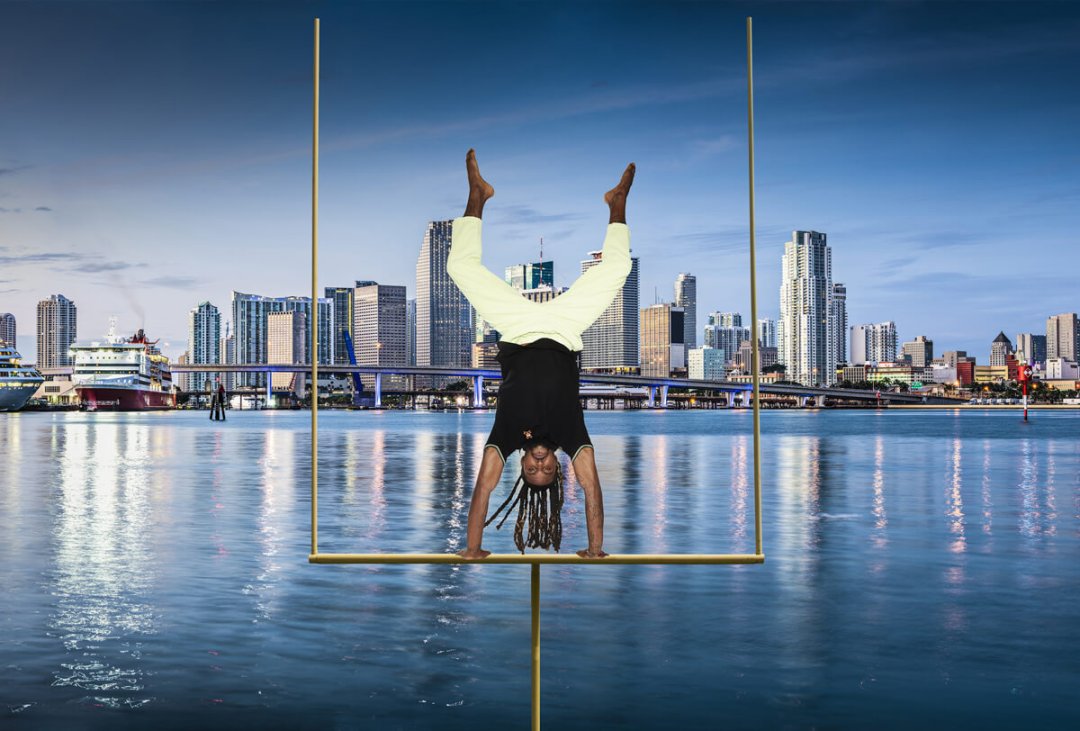 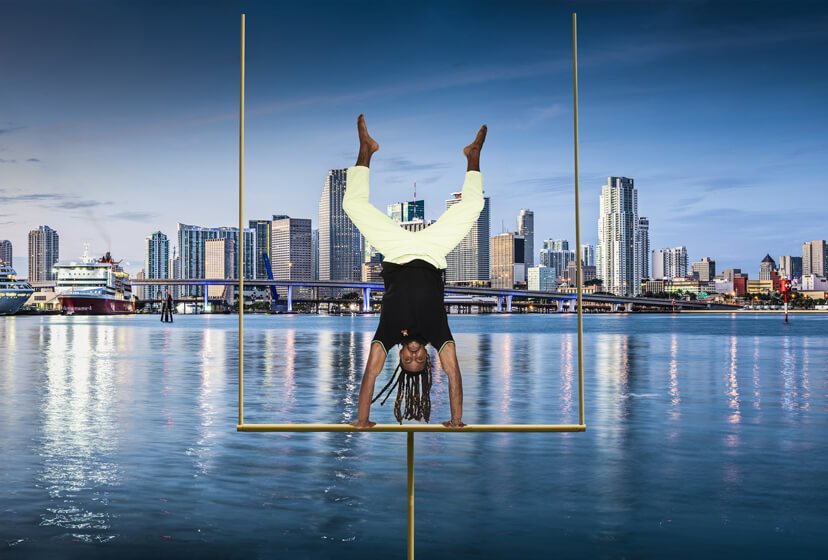 Do you think the perceptions surrounding yoga have changed in the last decade?

When I started doing yoga, let’s just say that I was pretty much the opposite of what people perceived to be the typical yogi. I’m a muscular African-American man. Seven years ago, that definitely wasn’t who you’d expect to see doing yoga. But thanks to social media, it’s not far-fetched for someone to hear me say I do yoga. Most people actually tell me they’ve been thinking about getting started in it, but aren’t sure where to begin. So, when I first started, it was a bit eyebrow-raising, but it’s commonplace now. There’s no more prototypical yogi — it can be anybody.

And is that part of what your goal is? To win over people that didn’t see themselves in the prototypical yogi?

Absolutely. Especially with my following now, what I want people to see is someone that looks like them or comes from their background doing yoga. That’s the biggest thing for me — I want to make it more common to see a black man doing yoga, or an athlete doing yoga, or a muscular guy doing yoga. Whatever it may be. Someone from the hood that does yoga. I just want to make it more accessible for everybody who wouldn’t normally be able to attend a yoga class.

Keep up with DJ Townsel here: Hooping it up with Jordan Kilganon to talk about the allure of jumping high, the secretive world of professional dunking and just how important projecting confidence is in his line of work. We connected IRL with the IG meme artiste to talk about life offline, what makes a great meme and how his kids end up inspiring his best work.